A family’s struggle to keep their baby girl alive had reached a critical point when the insurance company had denied her surgery at the family’s preferred hospital. But Friday, after the health insurance company reversed its decision, 7 month old Savannah had the crucial brain surgery and is said to be doing great.

Savannah had life-threatening brain tumor and needed immediate surgery. Her parents wanted to have the operation at the renowned Texas Children’s Hospital because the doctors had been monitoring her condition for months and had been preparing for the surgery that was needed to remove the tumor. 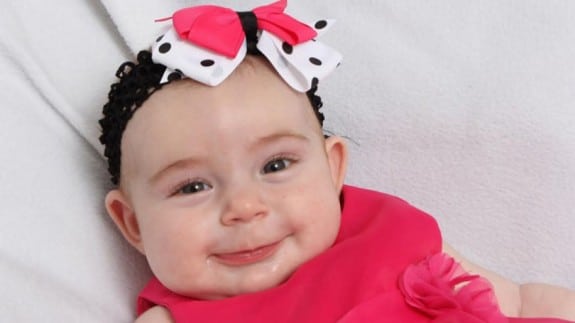 But the family got a setback when Superior HealthPlan, the insurance company refused to pay for the surgery at the Texas hospital claiming the doctors there were out-of-network. Following a FoxNews.com report though, the company reversed its decision which allowed Savannah to go for the surgery on Friday.

“She did great. The doctor is very pleased with the outcome so far. My baby is doing great. The surgery was near perfect.”

They believe that she will now be at the hospital for about a week.

Tessa, an army veteran and mother of four including Savannah said the cost of the surgery was about $1 million and the insurance company informed them late on Thursday that they were willing to pay for it at the preferred hospital.

“We got a call from the neurosurgeon saying they got approval,”38 year old Tessa said on Friday before the operation.”They had a cancellation today so it worked out.”

I am ecstatic,” she added. “We’re so thankful.”

Superior Healthplan said in a statement,

“Our number one priority has been to deliver the best health outcome for this child, as it is for all of our members. Superior is happy to have identified a solution that ensures that this child receives continued care from the provider established prior to their enrollment with Superior. We will continue to assist this family in making sure they receive the care they need.”

“While we have complete confidence that our in-network providers have the expertise and resources to give all of our members the individual care they need, we approach every member’s care individually. The importance of maintaining continuity of care combined with the complex and timely concerns of the family were critical to this decision,” the statement said.

Savannah was just four months old when she began having her seizures. She was initially admitted to a hospital in Temple, Texas, after she had 15 seizures in a 24-hour period. She was then transferred to Texas Children’s Hospital where doctors thought she was too young to have a brain surgery.

The doctors continued to monitor her condition and found that the tumor kept growing. On Tuesday the specialists ordered an emergency surgery but the roadblock came when the insurance company refused to bear the cost of the operation.

Superior HealthPlan had been covering Savannah’s care all along — including pre-approval for another MRI to be conducted on Monday. But they were not ready to pay for the surgery as the company said the Texas Chilren’s Hospital was an out-of-network provider. They instead recommended a surgical facility in Austin, about an hour south of Georgetown. This was on June 27.

The Snodgrass family refused to go to any other facility though as they believed their daughter’s best chances lay with Dr. Daniel Curry, a pediatric neurosurgen, who was to perform the operation at the Texas Children’s Hospital.

The family’s persistence along with timely reporting about the challenge they were facing, finally led Superior Healthplan to relent.

“The story you wrote touched them,” said Tessa to Foxnews. “It got them to do the right thing.”

Savannah is now recuperating from her operation and will hopefully soon be back home healthy and tumor-free.