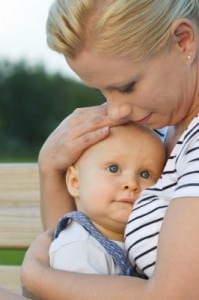 Do you have an irritable infant? A recent study says the best thing you can give them is your Mommy love!

In a study that appeared in the journal Child Development, researchers at the University of Maryland evaluated 84 infants from birth to age two. During the first evaluation, infants were assessed on their irritability levels at one month of age. Irritability levels were tested by exposing the infant to various types of stimuli like dressing and a ringing bell. Of the infants tested, around one-third scored as highly irritable. The remaining two-thirds were rated as moderately irritable.

The infants which were now toddlers were assessed, yet again, at 18 and 24 months. The researchers were now looking their reactions to unfamiliar people and toys. Toddlers in the moderately irritable group were not affected in their exploration or social skills by the attachments they had to their mothers. In the group of highly irritable toddlers, however, there was a clear distinction between the children that were securely attached to their mothers and those that were not.