Home » Italian Nun’s Stomach Pains Turn Out To Be A Baby!

An emergency trip to the hospital earlier this week revealed that not only was a Salvadorean nun pregnant, she was also in labor.  A surprise to everyone – including the new mom, the foray ended with a 7.7 pound bundle of joy.

The Italian media reports that Roxana Rodriguez was transferred by ambulance last Tuesday suffering from “severe pain in the belly”.  At the hospital it was determined that ‘pain’ was a baby boy, who was ready to come out.

Taken aback, the new mom did not get a lot of support from her fellow nuns when the real reason for the hospital visit was brought to light.

Sister Herminia, the Mother Superior of the Disciples of Jesus of Rieti, said the new mom “has done all alone” and noted that the other nuns in the convent hadn’t noticed anything.

“She did not know how to resist temptation, but she has not hurt anyone. I don’t know why there is so much attention on this story. “said Sister Herminia 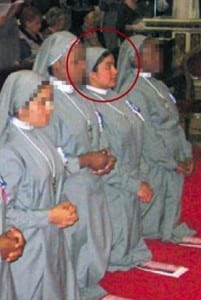 Roxana arrived at the nunnery in Rieti, Italy last Summer and took her vows to became a nun in the order last September.  She told officials that the father is a man from her native El Salvador but she has so far not named him.

Father Benedetto Falcetti, priest at the nearby St Michael’s church in Rieti, said,

‘It all happened last spring, around March or April time when she was back in El Salvador to get her passport renewed.

‘She has not said who the father is but I understand he is an, shall we say, old flame of hers from when she was younger. At some stage I expect she will tell the father that he has a son and they will be reunited but I don’t know when that will be.’

While Father Falcetti has yet to visit the newborn, it is very clear the other nuns at the convent have no plans to offer any well wishes in person.

One nun, who answered the telephone at the convent, said,


‘No we must certainly not be going to visit her. What she has done is not right at all. She has betrayed her vows. She will not be coming back here.’

‘I am so happy. I feel more of a mother than a nun, I think that’s obvious. I decided to call him Francis in honour of our wonderful south American Pope. I do not feel of guilt. I will be keeping him and bringing him up.

‘He is a gift from God. I am little worried about all the publicity, not only in Italy but in El Salvador and all over the world. Everyone is talking about this and I don’t think I will be able to return to my home country, let alone Rieti.’

Roxana has also received a lot of support from parents at the hospital.

‘I thank all the mothers, fathers, grandmothers and even the nurses of this department – is moved – in a flash, after the birth of Francis, gave me diapers, onesies, bibs and bonnets, because I was not in the least prepared. They also organized a collection for when I get out of the convent and I will not have the means to live’

Regardless of the unusual circumstances of Francis’ arrival, he is definitely a gift.  Congratulations to the new mom.