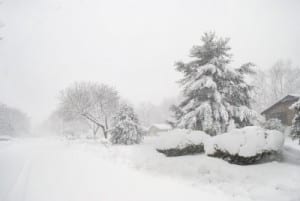 The blizzard that swept through parts of the North East left many travelers stranded and stuck. For one family, it meant giving birth in the front seat of their car as traffic stayed at a halt.

Joan Pierre-Mann was just hoping to get through Sunday without going into labor. That day a blizzard was coming down and stranding anyone who dared to try to travel out. So when labor started early Monday morning, she sighed with relief that she had made it past the heart of the storm. Unfortunately, clean up from the blizzard was not yet complete.

Joan and her husband tried making their way to the Saint Barnabas Medical Center in Livingston, however an hour later they were still not there. The Sunday Blizzard had overturned buses and stranded cars all around the city. Because of that, the couple had to take detours to get around places where clean-up was not finished. Unfortunately, the baby was not willing to wait.

The couple were only half a mile from Saint Barnabas when little Daniel arrived. After only three pushes, the 6-pound, 10-ounce baby boy was born in the front seat of the couple’s Toyota. The birth was assisted by Detective Vincent Fortunato, an emergency medical technician. From the back seat of the car, he helped Joan deliver the baby and clear his nose after birth.

“It was cramped in the car,” said Fortunato, who described the new mom as relatively calm even though she was in pain. “I couldn’t even clamp the cord because of how she was situated.”

Despite the surprise entrance, mother and bay are doing well and are both healthy. The family is still surprised about the events of the birth, but they are glad to have their new baby alive and well.

“We knew Daniel was going to be a miracle,” the new mom said about her 6-pound, 10-ounce son. “I’ve been on bed rest for three months. I thought that was the miracle part. But (getting to) 39 weeks and not being able to get to the hospital?”

“These things always happen to us,” she said.