Home » Jill Duggar and Derick Dillard Reveal Why They Announced Their Pregnancy So Early!

When you find out that you’re expecting a child, it’s news that you want to share with the world, shout it from the rooftops! A brand-new little life is growing inside of you, and it’s simultaneously the most exciting and terrifying time of your life. But most women choose to wait until the three month mark, approximately 12 weeks, to announce the news to extended family and friends. Perhaps this is why the joyous news of Jill Duggar’s pregnancy has come as a surprise to many. 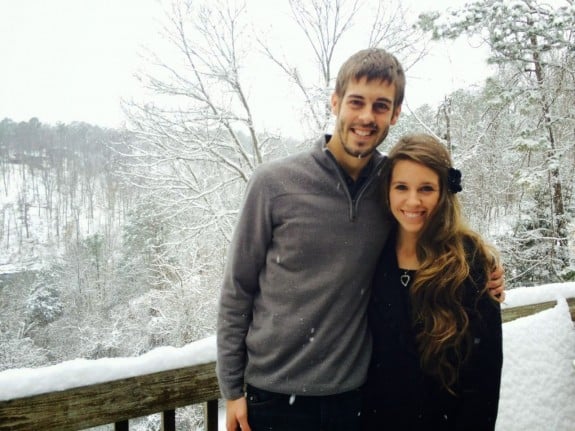 The main reason that many couples choose to wait to announce a pregnancy is because of the risk of miscarriage, which is one of the most frequent problems to occur during a pregnancy. A large majority of miscarriages often occur during the first trimester. That risk decreases vastly after the 12th week of pregnancy. Christine Proudfit, MD, assistant professor of obstetrics and gynecology at NYU’s Langone Medical Center says,

“The risk of miscarriage significantly goes down after 12 weeks. Down Syndrome testing is at 12 weeks as well, so many people prefer to wait to get those results. Miscarriage is the biggest thing we worry about.”

Jill, 23, and the fourth daughter of Michelle and Jim-Bob Duggar of 19 Kids and Counting Fame, married Derick Dillard, 25, on June 21, with whom she had began a relationship with via Skype a year earlier. She is the second of the Duggar children to get married. The couple announced that they were expecting only 61 days after tying the knot. Sharing about their decision to have a short engagement, Jill told Page Six,

“We prayed a lot, prepared and really didn’t see any reason to have a long courtship and engagement. Once we knew we wanted to get married, we didn’t want to put off the wedding for a long time and provide a stumbling block for ourselves. We purposed to save ourselves physically for each other within marriage (even our first kiss for our wedding day!), so we had a short engagement period. We knew that we weren’t going to prevent having children, so when we found out we were expecting within our first month of marriage, we were thrilled!”

The newlyweds decided to share their happy news immediately, saying,

“Understanding that the majority of miscarriages happen within the first trimester, and believing that every life is precious no matter how young, we decided to share our joyful news as soon as we could.”

While quite a few people were skeptical of the couple’s decision to go public with the news, Proudfit calls it a “personal decision.” The child will be the first for the couple, but most certainly not the last. Jill says, “I have loved having lots of brothers and sisters and although Derick comes from a family with just one brother, both of us would love to have as many children as God will give us. We are also open to the possibility of adoption.”

The mom-to-be also dished some advice for the newly engaged about remaining chaste until marriage, saying, “You may not wanna push the wedding date out too far, as those natural God-given desires with too much time between engagement and marriage can make it harder to remain pure. If you are financially ready, and things are in place (which should be at the time the question is popped), we believe an engagement should only be long enough to plan a wedding!”