As a parent, you want everything that touches your newborn to be safe and gentle. And when companies advertise their safe, gentle baby products, we don’t expect to find ingredients tied to the words ‘known carcinogen’ on the label. Sadly, we’ve been duped. Our parents were, too. In fact, parents have been purchasing products that contain potentially harmful chemicals like parabens, bisephenol A, and formaldehyde for years, decades even.

While they still claim that their original formula products were safe, Johnson & Johnson has finally taken a step forward to making their ‘No More Tears’ products a little safer. The new formula still has the same lather, the same color, and that famous Johnson & Johnson scent, but there’s something missing from about 100 of their products now – formaldehyde and 1,4-dioxane. 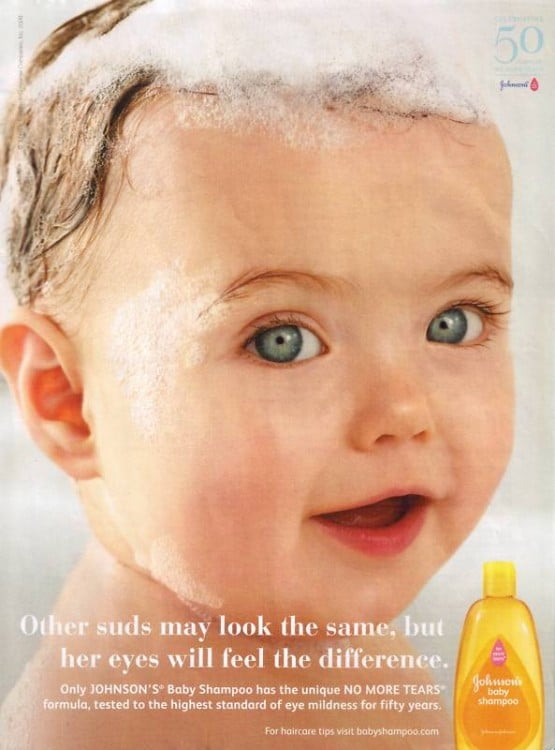 Neither were ever listed on the product labels because, rather than being actual ingredients, formaldehyde and 1,4-dioxane were considered by-products. The formaldehyde, which has been identified as a carcinogen by government scientists, was released over time in the Johnson & Johnson products by the preservative quaternium-15. And 1,4-dioxane, which is created during the process that was used to make other ingredients mild, has been linked to cancer in animal studies.

But if the products are truly safe, why is Johnson & Johnson removing them? According Cathy Salerno, the vice president of research and development for the company’s consumer products division in North America, the company has opted to remove these chemicals because of consumer feedback; feedback that she says has changed significantly over the last decade, with consumers wanting the company to ‘keep it simple’ to wanting to know what’s in the products they buy.

Environmental groups disagree with the safety claims, of course, and they say they wish that companies like Johnson & Johnson were more honest with consumers. In fact, Heather White, executive director of the Environmental Working Group, a part of the Campaign for Safe Cosmetics says that, while most companies do have 1,4-dioxane levels considered to be within the ‘safe’ limits, there’s simply not enough information regarding long-term exposure. And, she added, more and more evidence is suggesting that cumulative long-term exposure may be dangerous.

“Will a kid get cancer because there’s formaldehyde in their shampoo? We don’t know the answer to that,” she told NY Times. “When in doubt, take it out.”

Johnson & Johnson had done exactly that – at least for the most part. Formaldehyde has been completely removed, but 1,4-dioxane still exists. However, the company says they have reduced the levels to very limited trace amounts, from about one to four parts per million. The job wasn’t easy though, the company says. In fact, they went through a number of failed trials.

“There was a lot of angst about it,” Ms. Salerno, who was one of the executives who oversaw the team of about 200 people working on the project. “Our people in the marketing department were adamant that they wanted the exact same product.”

Replacing the undesired ingredients, which did serve an actual purpose within the product (consistency, color, smell, etc.), proved to be a bit of a puzzle, Salerno said. The first new ingredient they used caused particles to settle at the bottom of the bottle. Fixing that caused the shampoo to turn a dull brown color. Another preservative turned the shampoo consistency watery. And when they finally thought they had the answer, they discovered just days later that the wash turned cloudy. Then two products, both of which held together on color, consistency and scent, failed skin tests on adults.

After testing somewhere around 2,500 raw ingredients and 12 to 18 versions of the Johnson & Johnson products, they came up with something to present to 74,000 consumer volunteers. Their hope? To make the change as inconspicuous as possible.

“If you can’t tell the difference, then we did our job,” Trisha Bonner, principal scientist for Johnson & Johnson consumer products told NY Times.

The company’s next project is the remove parabens, another common chemical under fire lately, from their baby products and then their adult products. This is definitely a good thing for consumers, but Ms. Salerno and others from the company say they are sometimes frustrated with critics that promote the idea that natural ingredients are inherently better than scientifically engineered products.

“I like to remind people that poison ivy is natural,” Salerno said.

She added, however, that she and the company couldn’t ignore the concerns over their customers when it came to concerns of health and safety.

“This lands right at the heart and soul of what Johnson & Johnson is about, so we really had to take this very seriously,” she said. “I tell people, in 28 years with this company, this is by far the most challenging project I’ve ever worked on. But it’s a real point of pride.”