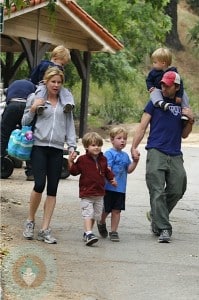 Being fit is extremely important to the super-fit mom of three (Oliver, 5, and twins Gus and John).

“I definitely feel really good if I’ve gone for a run or I’ve been at the beach all day,” the actress told Health.com

In fact, running is so important to Julie that running a marathon used to be on her bucket list.

But after sustaining an injury, Julie learned just how important being flexible in your dreams can sometimes be. And in that flexibility, she found another accomplishment to be proud of.

“I was training for the LA Marathon, and I tore the cartilage in my hip. I was devastated. My younger sister, who’s a doctor said, ‘You have to decide: Do you want to run a marathon or do you want to run forever?’ I was like, ‘Crap, if you put it like that.’ So I changed the goal. My ego still wants to run a marathon, but I want to be active for the rest of my life. Luckily, I was finished having kids by 40 – so I knocked that one off. I made people.” 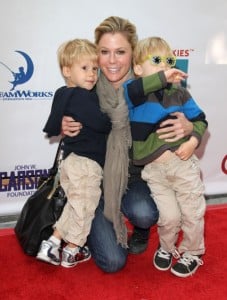 And with those little people, Julie finds clean and crazy fun.

“We have a lot of crazy dance parties in the shower,” she said. “A dance party with three naked children and one fairly naked mother? There’s simply nothing better.”

But it’s not all fun and games; Julie and her kids work hard on “the farm.” Well, sort of.

“L.A. has people who say, ‘Everything you’re eating we’ve raised, grown and slaughtered.’ You’re like, really? But we have rosemary in front of our house, and my kids think it’s the coolest thing to go outside and get it,” she said “They think: We’re farmers! I’m like, Exactly right! You live in Studio City, but now you’re a farmer.”

Julie also reminds us that, no matter how much fun it is having shower dance parties and mini farms, it’s still important to spend time being a grown-up.

“For Sofia Vergara’s birthday, we flew to Mexico. It was just my husband and me – my kids would have ruined it,” she said, adding that her favorite date night is movie night. “Our best date night is going to the movies. We get popcorn, Twizzlers and Milk Duds – we call it Popcorn Dinner. We eat it like pigs at a trough and watch a movie and it’s really nice.”

Of course, being an adult also means being a kid sometimes, or at the very least, finding the funny in life.

“I hate to admit how juvenile I am, but one of the things that always makes me laugh, besides [my co-star] Ty Burrell – the funniest person I’ve ever met – is damnyouautocorrect.com. Parents trying desperately to text and it’s coming out all wrong? Holy crap, is that funny. I’ll have tears streaming down my face,” she said.

“Ty and I were talking about this ridiculous [Modern Family contract renegotiation business. He and I are – how shall I say? – thrifty people who cringe at the world thinking we’re, like, fancy people. I said, ‘I don’t want anybody asking me about my golden toilet.’ And he goes, ‘Yeah, or your fur sink.’ I started laughing uncontrollably. A fur sink is the best visual!”

Tonight Julie won her 2nd Emmy award.  When asked where she will put the golden statue, she admitted,

“High out of the reach of my son, Oliver, who broke the last one,”

Kids really do have a way of bringing us back down to earth.  To the professional world, an Emmy is the highest honor a television actor can achieve.  To kids, it’s just a cool figure with a golden ball.