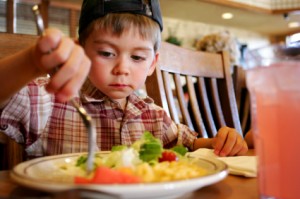 Going out to eat at a kid friendly restaurant is an event that many families enjoy each week. However when the numbers are crunched, many of the items from the kids’ menus are recipes for disaster.

Nearly 20 percent of children, aged 6 – 11, are obese. Children ages 12 – 19 have an 18 percent obesity rate. Overall the ages, there are another 15 percent who are deemed at risk of becoming obese. Many groups and government offices have spoken out about making eating healthy foods a top priority for children. Yet at some of the top kid friendly restaurants, kids can get an entire day’s worth of food in one meal. And then stick around for desert.

The authors of “Eat This, Not That!” searched for the worst food offenders and lined them up for parents to see. 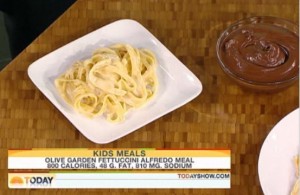 Italian restaurant Olive Garden offers a creamy, fatty Fettuccini Alfredo meal that kids enjoy. Unfortunately, the meal comes in at 800 calories and 48 grams of fat. It also holds a breathtaking 810 mg of sodium, or salt. This one dish has the same amount of saturated fat that 1.5 jars of Nutella has, far more than the American Heart Association recommends. Instead, the authors suggest the Cheese Ravioli meal for kids. Their tip is to stick with tomato based sauces for kids, these are going to be naturally lower in fat and calories.

At Applebees, the Grilled Cheese with French fries weighs in with an amazing 1,020 calories and 2,170 mg sodium, not to mention the 54 grams of fat. A homemade grilled cheese comes in just under 300 calories, yet this restaurant manages to sneak in an extra 640 calories in the sandwich alone. Instead, they suggest the hotdog with applesauce. 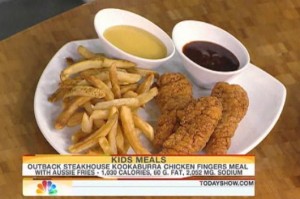 Families that eat at the Outback Steakhouse should probably avoid the Kookaburra Chicken Fingers meal with Aussie Fries on the kids’ menu. This simple meal is served with 1,030 calories, 60 grams of fat, and 2,052 mg of sodium. It is the same as feeding your child 12 Frosted Chocolate Fudge Pop-Tarts for dinner, and has as much salt in this one meal as a child should be eating in one entire day. Servings meals with such high levels of salt intake puts a strain on a child’s cardiovascular system. Instead, order the Joey Sirloin with Fresh Seasonal Veggies with only 435 calories, 28.5 grams of fat, and 631 mg of sodium.

Denny’s offers a popular Slap Shot Sliders meal with Finish Line Fries. Though the little burgers are cute, they comes in at 1,070 calories, 53 grams of fat, and 1180 mg of sodium. Despite the athletic sounding name, there is nothing healthy about this meal. An average 10-year-old needs 1,600-to-1,800 calories per day. This one meal meets almost all of those needs in one sitting. Instead, they suggest the Spaghetti, Set, Go! With Apple Dunkers that has only 390 calories, 7 grams of fat, and 325 mg sodium.

The worst offender over all is the Friendly’s Mac & Cheese Quesadilla meal with Friendly Frank, Shirley Temple and Friend-z Peanut Butter Cup. This fat and salt loaded meal has 2,270 calories, 109 grams of fat, and 3,320 mg of sodium. More than a day’s worth of calories, fat, and salt all loaded into just one meal. Feeding kids this meal is like serving 45.5 Glazed Munchkins from Dunkin Donuts. Even the better meals at Friendly’s are pretty bad. The Grilled Cheese With Mandarin Oranges, 1% Milk, and a Double Shot Cone still weighs in at 800 calories, 270 of which coming from the desert alone.

Going out to eat once and a while may be a fun family evening, but it can also be an unhealthy night for your kids. Many restaurants do not publish the food statistics on their menus, especially the children’s menus, so parents have to think ahead and be diligent. If nothing else, just order the salad. – Summer, staff writer