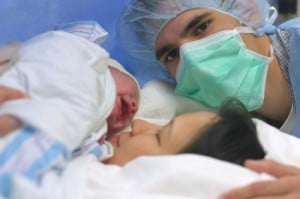 Any woman, who has been through labour, will tell you, ‘it’s no laughing matter.’  But a growing number of laughing gas (nitrous oxide) advocates aim to change that.

While nitrous oxide is still commonplace in delivery rooms across Canada and Britain, it has fallen out of favour, for a number of years, in the United States as patients and doctors moved toward the more complete pain relief of epidural technology.

But, because they require an anaesthesiologist, epidurals are expensive and are not offered around the clock, in many smaller communities.  They are also very powerful, and not every woman wants or needs her pain management to pack such a punch.

So a growing number of patients and doctors are hoping to see a comeback of the old laughing gas option.

“In this country, most people, when they hear about nitrous, they think it sounds pretty retro, that it sounds very old-fashioned and they’re sure there’s something bad or dangerous about it and we must’ve chosen to eliminate it.  But, I think we eliminated it because we went for the more specialized, higher-tech options.”

Bishop readily admits that some women will not find the pain dampening effects of nitrous oxide sufficient.

“It’s not right for everybody, but it’s something that, for many women, will offer a certain amount of relief,” she said.

The equipment to administer the medication has been hard to come by as, due to low demand, no company has been willing to supply it.  One company has recently started taking orders.  Currently, only two hospitals offer the drug, during labour; one in San Francisco and the other in Seattle.  Vanderbuilt University Medical Center, in Tennessee, recently bought second-hand equipment to see them through until new equipment becomes available in April.

Officials at Dartmouth-Hitchcock medical center intend to buy two machines.  They anticipate that up to 20 percent of their patients might try nitrous oxide.

“We have a number of people who don’t want to feel the pain of labour, and nitrous oxide would not be a good option for them.  They really need an epidural, and that’s perfect for them.  Then we have a number of people who are going to wait and see what happens, and when they’re in labour, decide they’d like something and then the only option for them is an epidural but they don’t need something that strong.  So they would choose to use something in the middle, but we just don’t have anything in the middle.”

By the summer, the hospital hopes to be able to offer labouring mothers that much desired middle ground.  Nitrous Oxide, ‘takes the edge off’ pain without deadening all sensation, and that is all many women want. – Jen R, Staff Writer