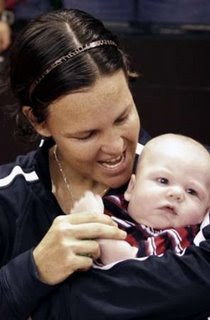 Triple grand slam winner Lindsay Davenport has pulled out of next month’s Australian Open because she is pregnant with her second child.

She is planning to take a break from tennis after revealing she is pregnant again.

“Of course this unexpected but exciting surprise now means I will be putting tennis on hold for the foreseeable future,” the mom-to-be said in a statement on yesterday.

Lindsay returned to the women’s tour in 2008 after giving birth to her first child, Jagger, and has since won four titles.