Home » Little Girl Survives Thanks to a Donor Heart 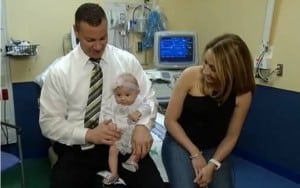 Kylee Faith Jones was born with a congenital heart condition where her heart was in the right side of the body instead of the left and needed a pacemaker to survive just three days after she was born. But thanks to a heart transplant the baby now five months old is healthy and recovering well.

Kylee’s mother Trace Jones was 16 weeks pregnant when she came to know about her baby’s heart defect through an ultrasound scan.

“Her heart was flipped. It was on the right side of her body and it was a mirror image,” Jones told the station. “She had third degree heart block which meant the top of her heart and the bottom didn’t fire at the same times.” 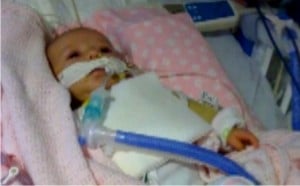 When Kylee was given the pacemaker after birth she did well for the first three months but then became seriously ill. She was unresponsive.

Recalls John Jones her father, “When I picked her out of the baby seat, I realized her body was limp. It was a very scary feeling.”

Doctors resuscitated Kylee and knew then that she would not survive without a heart transplant.

According to the United Network of Organ Sharing 2000 patients received heart transplant in 2010. About 88 percent of patients survive the first year, and about 72 percent survive for five years, says the National Heart Lung and Blood Institute. 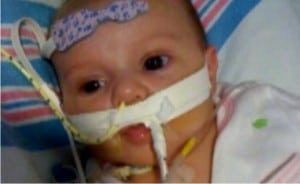 She “required maximal medical support in order to sustain her until the time of transplant, “ Dr. Maryanne Chrisant, director of pediatric cardiac transplants at the Joe DiMaggio Children’s Hospital, in Hollywood, Fla.

Kylee was the youngest to be operated for a heart transplant at the hospital and only the third such case handled here. When doctors compared the ultrasound done before and after the transplant, they were relieved. While Kylee’s own little heart had been contracting very poorly with abnormal rhythms, the transplant was pumping perfectly. 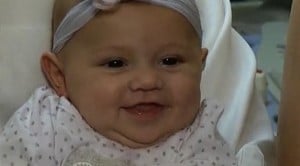 The Jones are extremely thankful to the donor family.

“It was sort of a mixed feeling in the sense that you feel guilty for another family that lost their child in order to give our child life,“ said John.

“We would love to meet them and just thank them,” added a grateful Trace.

The two have now also registered as organ donors.