The train-based animated TV series for preschoolers, Chuggington, in conjunction with Mastermind Toys has released the Chuggington Wooden Railway. 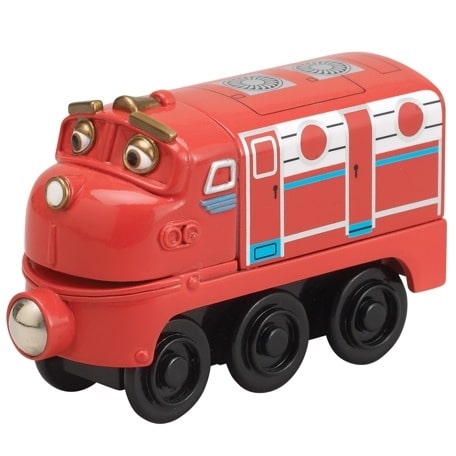 Based on the TV series Chuggington, that follows the adventures of three young trainee locomotive, (or “chuggers” as they are called in the show), called Wilson, Brewster and Koko.  The line is a series of train toys, destination pieces, and starter sets, and is completely compatible with all other major wooden railway toys!

The BEST part about Chuggington Wooden Railway is the toys themselves!

The wooden trains are chunky, brightly coloured, and they bring a lot of fun to the table! All of your favourites from the show are here (even everyone’s favourite, Old Puffer Pete!) The colours of these trains really stand out, and sized perfectly for little hands.

The track is made from high-quality wood and is compatible with all other major wooden railway toys. The dimensions are exactly the same, so there’s nothing to stop you from growing your existing collection with Chuggington!

The Destinations are where Chuggington Wooden Railway toys really stand out! The lineup features some exciting new destination pieces including an engine wash, clock tower, signal depot… and the showpiece of the line, the two-level roundhouse! The roundhouse gives you an idea of the fun that comes from these toys, as it comes complete with an elevator-turntable piece (how else are the engines going to get to the second level?!?), it can also be taken apart into 2 separate one-level roundhouses, and has track that runs along the top of the roundhouse itself! All of the Chuggington destinations, are fun, bright, and built for play!

GIVEAWAY: Mastermind is offering ONE Growing Your Baby reader the opportunity to win the following TWO pieces from the amazing new Chuggington Wooden Railway:

Congratulations to our winner: Sheila