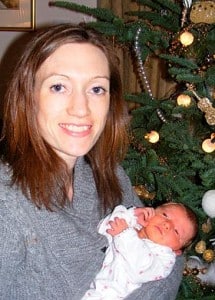 As we’ve reported on many on many occasions, babies will come whenever and where ever they please, regardless of your preparedness and that is exactly what happened to a midwife when she had to deliver her own baby using just a make-up mirror at home.

28 year old Claire Clarke-Wood is a midwife and when she got pregnant her colleagues joked that she might end up delivering her own baby. But the jokes became a reality when her contractions began unexpectedly at home, three weeks before the due date.

Claire had just come back home after work at the Croydon University Hospital when her contractions began.

“My colleagues had joked that I would end up delivering my own baby but I never thought it would actually happen. I had a bit of backache but put that down to the long shift.At about 5am I began to realise I was having contractions but as it was my first time I knew it would probably take a long time so I told Tim I was probably looking at giving birth maybe on Tuesday so I’d wait and see.”

Claire decided to take a bath and that’s when she realized that her contractions had increased.

“I ran myself a bath and suddenly the contractions came on fast. I was laughing because it was so unexpected. The contractions just kept coming and coming.”

The experienced midwife used a Tens machine to take care of her own birthing pain. Soon, after 7.30am on December 11, she gave birth to 6lb 12oz Esmay in her bathroom.

She said, “For it to be that fast is pretty much unheard of. She was due on January 4 so a bit over three weeks early, but she’s doing fine. Afterwards it was just like I was at work, I was clearing away the towels and putting on a cup of tea – Tim was just trying to get me to settle down.”