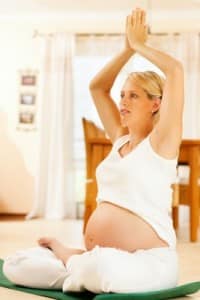 While postpartum depression receives a lot of acknowledgement, there is another form of depression that is less talked about: perinatal depression (depression during pregnancy). For sufferers of this psychiatric condition, the fluctuation of hormones and stresses of everyday life get to be too much, and they become depressed.

Antidepressants are often used to treat depression in both pregnant women and non-pregnant women. However, many depressed moms-to-be refuse medical intervention because they are concerned about the safety of their babies. Sadly, untreated depression can also lead to some pretty serious health risks for both mom and baby, including premature labor, poor weight gain, pre-eclampsia, and a lack of bonding between mother and baby both during and after pregnancy.

“Unfortunately, few women suffering from perinatal health disorders receive treatment, exposing them and their child to the negative impact of psychiatric illness during one of the most vulnerable times,” said Maria Muzik, lead author on a recent study that sought to determine if yoga during pregnancy could help combat perinatal depression. “That’s why developing feasible alternatives for treatment is critical.”

Yoga may very be one of those feasible alternatives. Not only are pregnant women more likely to agree to nontraditional, non-pharmaceutical method to treat  their depression, the recent study, conducted by the University of Michigan, found that mindfulness yoga is actually rather effective at reducing depression symptoms in pregnant women.

In Muzik’s study, women who had displayed signs of depression between 12 and 26 weeks pregnant participated in a 90-minute mindfulness yoga session for a total of 10 weeks. Women who participated in the program reported a significant decrease in their depressive symptoms.  They also reported a stronger attachment to the babies they were carrying.

“We hear about pregnant women trying yoga to reduce stress, but there’s no data on how effective this method is,” Muzik said. “Our work provides promising first evidence that mindfulness yoga may be an effective alternative to pharmaceutical treatment for pregnant women showing the signs of depression. This promotes both mother and baby wellbeing…this study builds the foundation for further research on how yoga may lead to an empowered and positive feeling toward pregnancy.”

Yoga has grown in popularity in the U.S., but pregnant women planning to reduce stress and depression symptoms with the help of yoga should know that there are actually two different types of yoga. Most classes offered in the United States focus on the “exercise” portion of yoga, rather than the relaxation and mind-body work. In contrast, mindfulness yoga encourages participants to be “fully in the present moment” by combining physical poses with meditative focus. This is the essential component to combatting depression, according to researchers on the study.