Science puts the chances of having identical quadruplets at one in 15 million; the odds are even slimmer for spontaneous identical quads. That makes Taylor Becher and Lance Thompson, who welcomed four identical twin girls into the world on March 11, an insanely lucky couple. 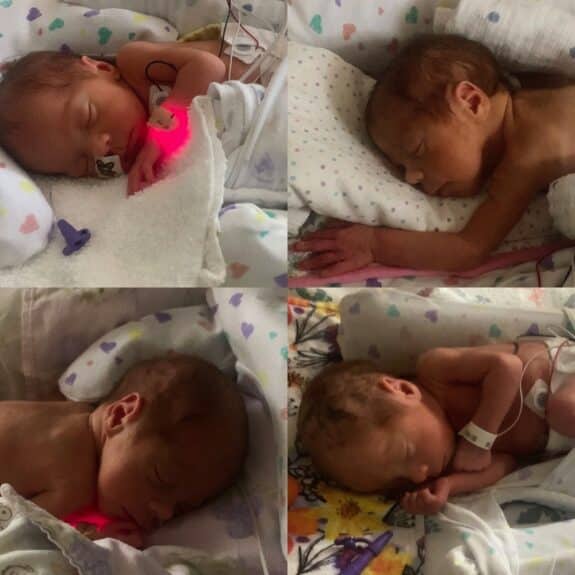 “It started off as twins. Then all of a sudden, my OB was like, ‘No. There’s three,’” Taylor told Today.

Her partner, Lance, was about to joking ask if there might be another baby in there when the doctor picked up a fourth heartbeat. That’s when reality set in for the expectant parents.

Taylor, who already had a 21-month-old boy at home, admitted she was scared to have so many babies inside of her at once. She knew the risks were high, but her partner helped calm her.

“There were times where I would Google and stress myself out, but Lance would talk me down,” Taylor admitted. “He would say, ‘Everything is going to work out.’”

Thankfully, she was already a stay-at-home mom and was able to take great care of herself and the babies growing inside. She never went on bedrest, and all four girls were born without serious complications. Each of them is now breathing on their own, and even the most at-risk baby, Lakely, who was growth restricted throughout the pregnancy, is astounding doctors.

“She was growth restricted throughout my whole pregnancy,” Taylor said. “Then, she was the only baby who didn’t need any breathing assistance!”

Sawyer, Kennedy, Aurora, and Lakely are doing so well, in fact, that they are expected to come home sometime next month. Taylor hopes their older brother won’t be too jealous.

“Before the babies were born, I’d say, ‘Do you want to give your sisters a kiss?'” she said. “And he’d kiss my belly!”