Home » Minnesota Police Resuscitate a Baby And Deliver Her Twin

One mom is thankful for the quick thinking officers who responded to her 911 call after her twins decided to make their debut at home and one wasn’t breathing following her delivery. 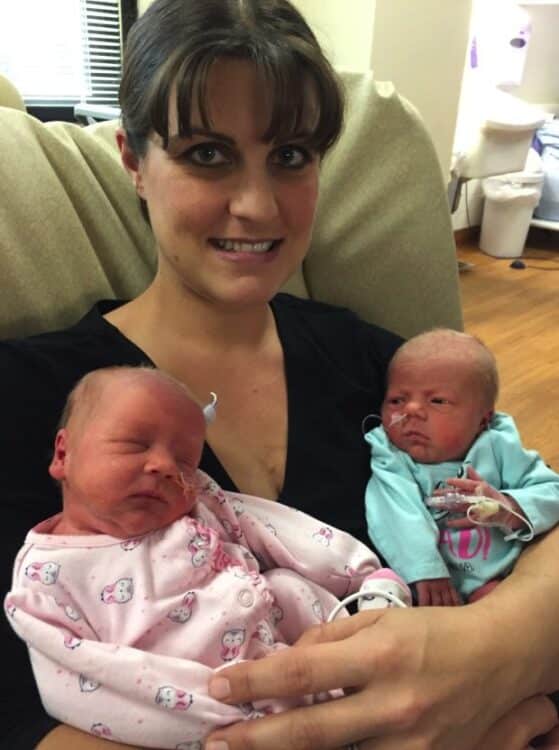 Nichole Mickelson was home with her 2-year-old son when she went into labor after taking a shower.

“By the time I got out of the shower. I was already having full-blown contractions,” the new mom told ABC News.

After calling her mother and husband, she called 911 who arrived and realized the doors were locked.

Inside Nichole has delivered her first baby and she wasn’t breathing.

“I was doing some rescue breaths on Anna but I knew I would have to stop because I could feel the baby coming,” she TwinCities.com.

Officer Matt Paavola kicked in the door and took over reviving the baby.

“The officer sprang into action and began CPR on the newborn baby girl, Anna, clearing the airway, giving mouth-to-mouth and compression until she came to life with that familiar newborn cry,” police said.

As Officer Paavola performed CPR on Anna, officer Scott Boecker arrived and learned there was a second baby on the way.

“Yes, that’s right, a second newborn,” Wyoming Police Chief Paul Hoppe wrote on the department’s Facebook page in describing the response to the 911 call. “Unannounced to the two officers, the mother was pregnant with twins. With the first newborn baby breathing on her own, the officers switched gears and delivered the second newborn baby girl Ashley.”

A nurse, Nicole said she could tell that the officers had been trained to respond to such situations, but that they probably never had to do it in real life.

“They’ve been trained in it, but they’ve never done it before, so I knew they were probably quite nervous,” Nichole told ABCNEWS. “But, yeah, they did great. It turned out to be happy ending.”

“When anybody’s put in that kind of situation I think adrenaline takes over and you don’t really have time to be nervous or panicky,” she added.

In the police statement, Hoppe welcomed the two new members to the Wyoming community and thanked the officers for their response.

“I am pleased to introduce Anna and Ashley Mickelson to our community,” he said, “and honor Officers Paavola and Boecker, whose actions saved a life and kept this family’s experience a joyful moment.”

“As a chief, you want to make sure you give your staff the necessary training to do their job, and you hope they recall that training when the need arises,” Chief Paul Hoppe wrote in his Facebook post. “On this day, these two officers performed flawlessly, professionally, without hesitation, with care and compassion to the family. … The Mickelson family will have one heck of a story they will probably carry with them for a lifetime.”