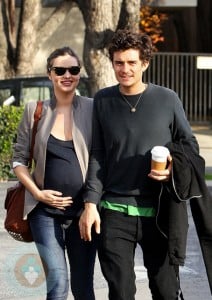 Congratulations to Miranda Kerr and her husband, actor Orlando Bloom, on the arrival of their first child – a boy.

The Australian model was announced to be in labor yesterday, after a false alarm on Boxing Day.

No details about the baby have been released, but he was born in Los Angeles on Thursday, January 7th. The new mom’s parents were said to be on hand for the delivery as was the excited dad-to-be!


Now that the baby has arrived, Miranda Kerr has said she doesn’t plant to retire from modeling the following saying,

“I think having children and pregnancy is a part of life, I look at how models like Heidi Klum, Adriana Lima and Alessandra Ambrosio have done it and made it a part of their lives.”

Congratulations to the happy couple on the new arrival. The two have been married since July.

For more on this celebrity, visit Celebrity Spider: Orlando Bloom.