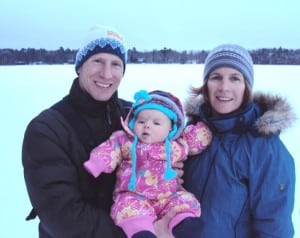 Susie Weber was a normal expectant mom who became legendary at the hospital where she delivered her baby girl because she chose willingly to bike to the hospital to give birth.

When Susie, an active 41 year old, felt a stabbing pain in her abdomen on the morning of 7th October 2010, she figured that she was about to go into labor and called her husband Paul. Hearing the news, Paul rushed to their garage, not to take the car out but to prepare their bikes as Susie had decided pretty early on into her pregnancy that she would bike to the hospital to deliver her baby.

Says Susie in the latest issue of Silent Sports magazine,

“When my husband, Paul, woke he quickly went to the garage to prepare our bikes for the ride to the hospital. …. At the time, though I didn’t know it, I was 8 centimeters dilated. Biking to my delivery had been a goal of mine since my first weeks of pregnancy and I didn’t think it was a big deal until one of the doctors told me later I had become legendary at the hospital.”

Susie biked one mile from her home in Menasha to the Theda Clark Medical Center and even she was a bit apprehensive in the beginning to hop on to a bike right when she was about to give birth but it turned out to be a great distraction!

“I somewhat reluctantly got on the bike and, to my surprise, enjoyed every minute of the ride, even when I was having a contraction. Despite all the dire warnings that I would crash my bike when the pain hit, I found that I could power through it. In fact, the contractions on the bike were the easiest to bear because I was distracted and doing something I love.”

While Susie’s case might seem like an extreme case of fitness during pregnancy, she says that for athletes it is possible to stay active and fit during pregnancy if they ‘approached it like training for a long distance event with extra bonuses.’

Susie had biked to her first doctor’s appointment in March and it is that very day that she had decided to bike to every appointment and also go for the final birth in a bike. Her doctor even re-confirmed every time she came if Susie had come biking.

Although hers was a high risk pregnancy because of previous miscarriages and her age, she also kayaked, swam, and skied apart from riding the bike during the pregnancy months.

“I think it was better for me overall and I recovered quickly and was down to my pre-birth weight in three weeks. My doctor was a great person to work with.”

“I think people treat pregnancy as a sickness; and you’re not sick. You just have to be reasonable, I think.”

Susie advices in the magazine that it is important to have a good, understanding doctor and a partner who supports you all the way. Her doctor asked her to ban high intensity workouts but continue with the ones she felt comfortable and not tired.

She also advices to keep the final goal in mind.

“A healthy baby was my obvious objective and motivation; enough to keep me working out. But I also wanted to be in the best possible shape to keep up with my baby and provide a positive role model when she did arrive.”

Tess Weber was born a healthy 7 pounds and 11 ounces and is all ready to be part of her parents future adventurous activities. – Atula, Staff Writer