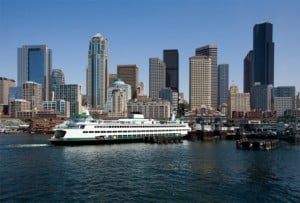 The Bainbridge-to-Seattle ferry converted to a delivery room on Thursday afternoon when a women gave birth to a beautiful baby girl on board. Luckily, there were a midwife, an OB/GYN nurse and two EMTs onboard the ferry to assist with the baby’s arrival.

The woman had boarded the ferry at Bainbridge Island terminal and was already in labor, though she did not think that delivery would happen so quickly. When her contractions started coming closer together she alerted the ferry’s crew, who moved her to a second floor office.

WSDOT spokeswoman Marta Coursey told the Seattle times that as far as they know this is the first time any birth has taken place on board a Puget Sound ferry although babies had been born earlier on the ferry docks.

As soon as the woman was taken to the office an announcement was made to find if anyone with birthing experience was aboard. Quite coincidently, the midwife, nurse and EMTs came forward to help with the birth.

“What are the chances a midwife and OB/GYN nurse would be on board?” asked Coursey, who said she was also proud of the ferry crew’s response. “Our crews are really prepared for everything, and they have to be.”

When the ferry finally docked at Seattle, the emergency crew rushed to check but found that the baby girl was already on her way. Baby Lucy was born without any complications.

The woman and the baby were then taken to Swedish Medical Center shortly after.

The family later released a statement about the unusual birth thanking the crew and the passengers on board.

“We would like to thank the incredible crew of the Washington state ferry, Tacoma, and the kind people aboard who helped deliver our healthy baby, named Lucy, who came at lightning speed weighing 7 pounds, 3.6 ounces, and measuring in at 19 inches long. Mother and baby are both doing well and are very happy and healthy.”

That is definitely one story baby Lucy is going to hear many times as she grows up.