If you told Danielle Johnston she was a superwoman she would likely tell you she just did what came naturally. But it’s not every day that a mom needs to conjure the energy to save one of her children’s lives while in labour with her other two.   This is exactly what this mom did when she went into labour prematurely and one of her babies wasn’t breathing. 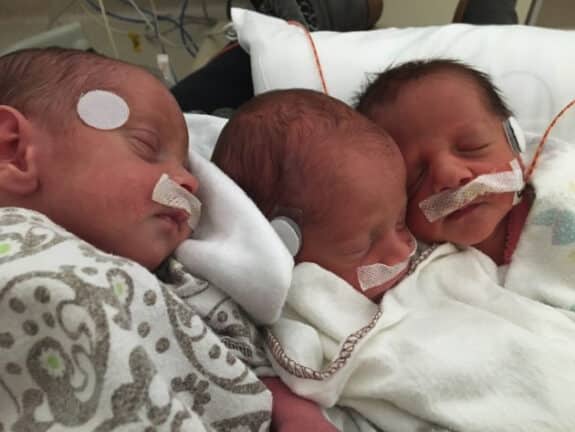 Danielle was putting her youngest kids to bed on July 16th when she started having contractions.  Thirty-two weeks pregnant with the triplets, she hadn’t previously shown signs of early labour.

“I woke up in horrendous pain.”

As her eldest son Dillon, 15, called an ambulance, the pain worsened, and then she had a strong urge to push.

“I kind of had to pull her out of me, and when she came out she wasn’t breathing,” Johnston said about her first newborn.

After helping his mom to the couch so she could perform CPR on the baby Danielle instructed Dillon to drive to the end of their road and wait for the ambulance.

As she is trying to keep her newborn alive the labour pains continued.

“I just kept doing CPR on the baby and … meanwhile, I have two more inside me and I’m fighting contractions,” Johnston, who lives on a farm near Griffin, Sask., told HuffPost Canada in a phone interview.

When Danielle’s husband Trevor arrived home he found his son at the end of the road.

“He just kind of said ‘Mom had a baby and I have to wait for the ambulance’,” Johnston said with a laugh.

When help arrived, mom and baby were first taken to a hospital together, but Danielle was later rushed to Regina when it was revealed the remaining babies were breech. Once they were delivered by C-section, the triplets were reunited in the hospital’s neonatal intensive care unit (NICU).

“It was kind of scary at first. They were all on oxygen and IVs. It was almost overwhelming. But the nurse said it’s day by day, and they’ll come off of all this,” she said.

Because the last two babies(boys) were born just after midnight the triplets now have two different birthdays. All three babies — Karlee, Jack, and Liam — are still in the NICU, where they’re being monitored as they grow.

Looking back on her birth experience, Danielle says she just did what needed to be done.

“I don’t think you have any choice. You just do it,” she said.

This is not the first time she has saved one of her kid’s lives.  Nine years ago when her daughter Kate was 10 months old, the pair were buried in the sand when a dune collapsed on them near Mainprize Regional Park in Midale, Sask.

“We uncovered her head and pulled her out. I got the sand out of her face and mouth and gave her CPR, and then she started to cry. It was like a weight was lifted when I heard her crying,”  Danielle told the paper at the time.