It is estimated that about 60% of twins will arrive prematurely.  But one Washington couple, is torn as they pray for their first baby, who was born at 23 week, while their second twin continues to grow inutero. 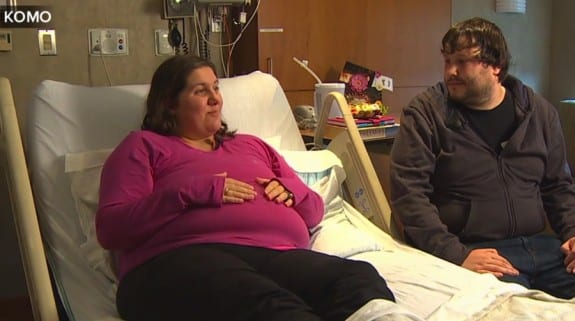 Holli Gorveatt was originally hospitalized after the identical twins she was carrying showed signs of a condition in utero called “twin to twin” syndrome. In that case, one twin draws blood from the other in utero. The condition can leave both twins sick, with one getting too much and the other not enough.

Once detected doctors performed a surgery in-utero separating the blood vessels, but in Holli’s case, pressure from the twins put too much pressure on her cervix, and the amniotic sac for one of her babies was unable to be contained.

As a result of the pressure, Dr. Martin Walker, director of fetal medicine at Evergreen Health Medical Center and his team were forced to deliver Link at 23 weeks, right at the edge of viability. 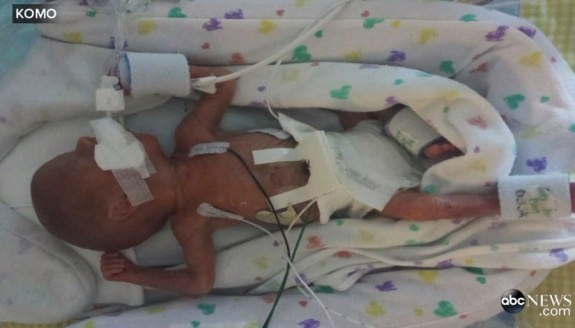 Weighing just over a pound, Link is dependent on specialized nutrition supplement that is delivered to his tiny body intravenously. 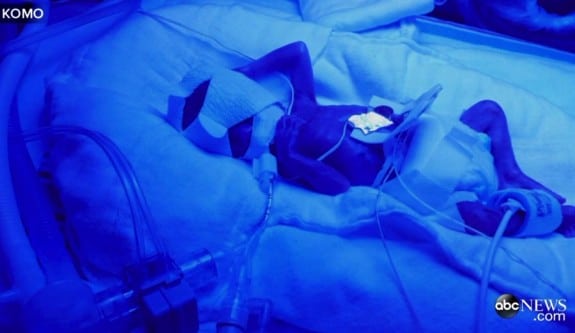 Once Link was born, Dr. Walker realized that the pressure had been relieved and that it was possible to keep his brother in by manually closing the cervix. Due to the procedure to stop “twin to twin” syndrome, the second twin Logan could remain healthy in utero.

“If she had gone into … full-on labor, there is not much we could have done,” Walker explained.

While the team hopes to have Logan delivered at full term, Dr. Walker said his odds for survival increase tremendously each day he remains in the womb.

“He will be bigger [than his brother], growth in utero is so much better than growth in the [neonatal intensive care unit],” he said. 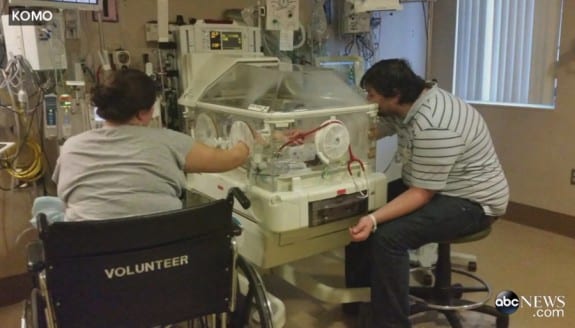 The new mama said she can already tell that her growing baby is doing well.

“Logan’s good, so he’s growing a lot and he’s just kicking. He’s got fluid, he can move around. He was stuck before,” she told KOMO-TV.

In 2013 a UK mom made history by delivering her twins 87 days apart.  If Holli makes it to term she will beat that record!