It seems like at least once a year, there’s an incident where a stroller has rolled out onto a subway track. Earlier this week, yet another occurred at the West Philadelphia train station.

The entire heart-wrenching episode was caught on surveillance camera. While you can’t really see what has distracted her, it’s obvious that she isn’t watching as the stroller rolls towards the tracks, slowly at first and then picking up speed. 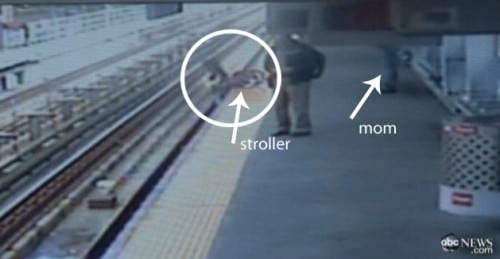 “It’s heart-wrenching because you can anticipate it, because the stroller does start to move at a very slow rate of speed and it kind of builds up,” SEPTA System Safety Director Scott Sauer told ABCNews.com’s affiliate, WPVI. “You want to tell someone to grab the stroller.”

Still strapped in his stroller, the baby topples onto the tracks. What grabbed the mother’s attention is unclear (possibly the sound of the stroller falling?), but she reacts quickly, jumping onto the tracks immediately to save her baby.

With lightning speed, the mom, 28-year-old Temeka Greer, unstrapped the toddler and hoisted her up into the arms of another waiting subway passenger. Meanwhile, someone used the emergency button to help stop any oncoming trains. (There’s a new one every 8 minutes at that time of day.) Once the baby was safely back on the platform, another Good Samaritan jumped onto the track to help the mother out.

Andrew Busch, a spokesman for SEPTA commended the passengers for rushing to the mother’s aid.

“It’s a great story of people helping out someone in distress, the way the other passengers reacted and particularly the one who had the presence of mind to press the call button and help us get train traffic stopped so that nothing more serious happened,” he told ABC News.

Emergency personnel arrived on the scene shortly after the incident. The little girl was treated for minor cuts and bruises, but is reported to fine otherwise.

According to Bush, the third rail of the track is electrified. Thankfully, neither mom nor baby touched the dangerous rail. And since the trains were stopped, there was no danger of an impending train once the button was pressed. But things could have been worse. Which is why Bush urged riders to be aware of their children (especially those in strollers) while waiting at the station.

Bush told ABC that the mother may have been distracted for just a moment and taken her hand off of the handlebar. A moment.

“[It] just kind of happened that quickly,” Busch said.