Breasts, though most often sexualized, are designed to feed babies. That is their purpose. Yet, when women nurse and must pump because they are away from their hungry little ones, many are made to feel as if they are doing something . . . unnatural. We are relegated to smelly and unsanitary restrooms, forced to hide in closets, and told to “wait for a more appropriate time.”

Miki Agrawal, the founder of Thinx reusable period panties, recently sparked a controversial conversation about all of this when she pumped and shared her breast milk at Burning Man. 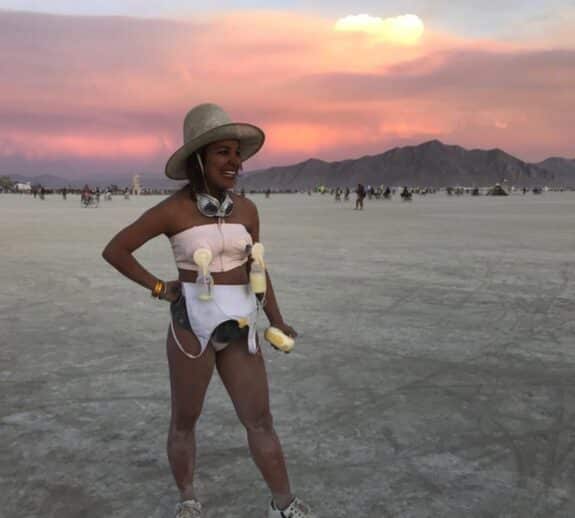 “I pumped my breasts every three hours at Burning Man and gave away most of my milk,” she wrote in the caption of her Instagram photo. “Some people downed a whole four ounces hoping for a hangover cure. Some wanted it for their coffee to make lattes. So many were excited and curious to try it.”

Curiosity over breast milk and its taste, in and of itself, is not a rare thing. In fact, I know a lot of people who have been interested in seeing what it tastes like. What Miki did find surprising was that a lot of people there weren’t sure why she had to pump every three hours. 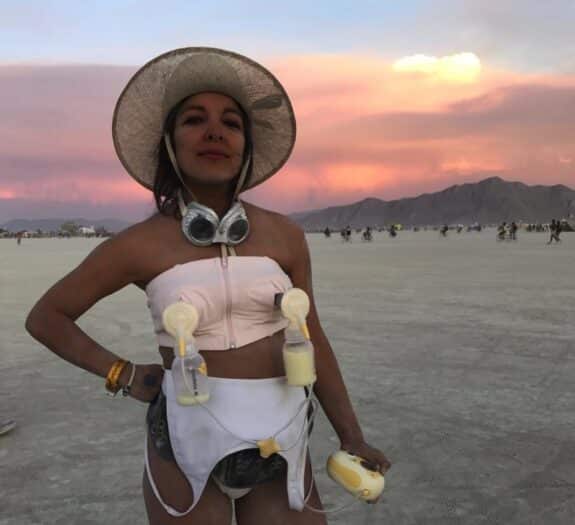 “They didn’t know that breasts would become engorged and super painful if they were not pumped — nature’s way of keeping mama and baby working together,” she wrote. “Every human has been birthed and raised somehow and yet even the smartest people have no idea what this process looks like.”

One could easily argue that the reasons behind this are due to the almost taboo nature of breastfeeding. Rather than asking questions or asking us to talk about, most people who have an issue with breastfeeding will simply glare or make a snide comment. A few brave folks may ask a mother to “relocate” to feed or pump for her baby. Some of these folks are truly appalled. Others have never experienced it, so it makes them uncomfortable, and discomfort causes them to act in ways that are in-line with societal views (which are not typically conducive to nursing).

It is exactly this issue that Miki’s breast milk sharing brings to light.

“First of all, we still live in a patriarchal system where breasts are over-sexualized and made to be for the ‘male gaze only . . . So it makes sense to ‘our current society’ to sequester women in back room closets to pump quietly — because heaven forbid our breasts be useful tools to keep our children alive. That’s not sexy, is it?’ Agrawal told Babble. “Second of all, and one of my girlfriends said it best: ‘It’s so funny to me how people have no problem (through indoctrination and marketing) drinking milk from a cow breast that has been obtained in an inhumane, filthy manner, with rampant udder infections, drugs, steroids, and fecal matter — yet, balk over drinking human milk from a clean, healthy source … indoctrination is powerful!’”

Yet, as a mother that has had children spanning over 12 years, I will admit that I’ve noticed a significant shift between nursing my first and nursing my last baby. Changes have occurred. And not everyone subscribes to the societal norms. There are mothers who have been there, and kids that grew up watching their mothers nurse. Many will step in and stand up for what is right.

So, to all you nursing moms out there – no matter how you see the sharing of breast milk (one would hope that someone with a serious health condition would not share, but let’s face it – a stranger’s breast milk could contain all matter of bacteria and viruses) I ask that you take away just one thing from this interesting but controversial topic; in the words of Miki: