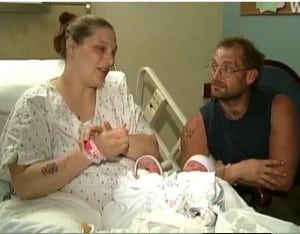 As we all know, babies don’t wait. They come when then want – regardless of where you are. A Pittsburgh mom learned this yesterday morning when one of the twins decided to arrive while en-route to the hospital.

After going into labour Danielle Bowers set off to the hospital but had to stop to deliver the first baby, Sasha

“We got to Gino’s Restaurant on Butler Street and little Miss Sasha decided she didn’t want to wait no more. She was coming out right then and there,” Bowers said.

Emergency crews arrived at the scene and took Danielle to a local Hospital, as she was beginning to give birth to the second baby.

“My other crew members on the rescue truck got there first (and) they were able to cut the cord on the baby. We arrived shortly, got them into the ambulance and safely to the hospital,” rescue worker Eric Barazotto said. 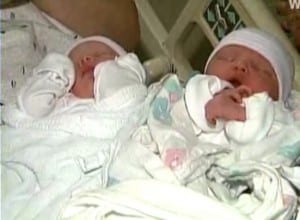 “Someone had tried to tie the umbilical cord with a shoe lace. We opened up our OB kit and did it professionally. We moved the baby into the ambulance, suctioned it (and) kept it warm.”

Thankfully Danielle delivered her second daughter  Sevira, at the hospital.

Dr. Giovanni Laneri, the twins’ neonatologist at West Penn revealed that the Sasha’s arrival could have been grave.

“It happens occasionally, but in this case, she delivered herself and the baby was breech,” he said. In breech births, he said, babies are at risk of getting stuck or asphyxiating because they are not positioned head first.