There was a time when Julie Grygla wasn’t sure she wanted to get married and have a family. Now, she’s a mother to triplets. Next year, she will add a set of twins to the mix. The inspiration? The reason she changed her mind? The source of her strength today? 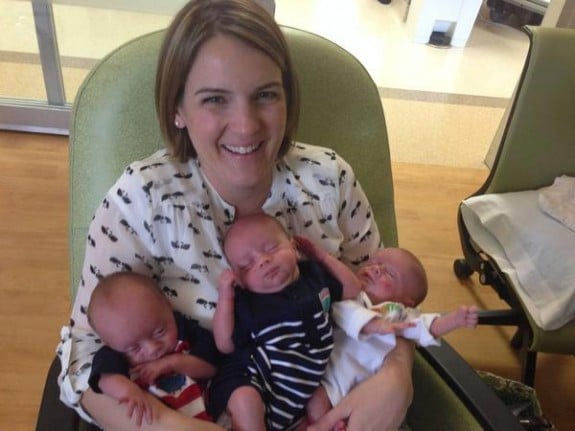 She says it came from God and her mother.

Julie grew up with 10 siblings and she often questioned why her mother had made the choice to have such a large family, why she’d chosen to devote so much of her time and attention to family rather than other endeavors. And they had a number of conversations about that choice which ultimately led to a conversation that would cause Julie to question her own priorities.

“She got really hurt one day when we were having one of these conversations,” Julie told the DeseretNews. “And she said, ‘This is the best thing I’ve ever done with my life, and to hear you talk so negatively about it really hurts my feelings.’”

Then Julie’s mother died while in the Missionary Training Center preparing to serve a mission for the Latter Day Saints Church. Julie went through a very rough time, questioning the existence of God and wondering where her life was going.

“Her death really shook me,” Julie said. “It was a pretty dark time. I really thought, ‘Why would He do something like that to me that he knew would destroy me?’ And I wondered, how could a God who loves me hurt so bad?”

But it wouldn’t be much longer before Julie, then 30 and teaching at Brigham Young University, when she would meet her future husband while on a blind date. Interestingly enough, that man – Dave Grygla, a family medicine doctor – had always wanted to have a big family but had pretty much ruled out the possibility because he was 41 and unmarried.

For a while, it would look like, even though Julie and David had married and agreed to start a family, it just wouldn’t happen. They were facing fertility issues and struggled with how to handle it.

“Dave once in his prayers said, ‘We’ll take as many spirits as you will send to this home. We will teach them the gospel and we will raise them up to you,’” Julie said.

Their prayers were answered with the help of in vitro fertilization. But then, once they went to the first ultrasound, Julie started to panic because the couple found out that they weren’t expecting just one baby, but three!

“Dave was thrilled when he found out we were having triplets. He kept saying, ‘I can’t believe it. I can’t believe I’m getting the big family I always wanted,’” Julie said.

But for Julie, the worry led to tears. And then, in the months after the boys were born, Julie started to feel overwhelmed.

“I felt like my days would never be more than feeding them, changing them, putting them to bed and then pumping and making sure that I ate enough so that I could make enough milk for them,” Julie said. “Those first few months were so hard.”

Thankfully, though, those crazy months have started to level out, and Julie says she’s found her strength.

“Now we play, and I sing songs with them. It’s so much more fun,” she said. “Every time I would start to feel overwhelmed, the Spirit would say to me, ‘Remember, I know what I’m doing. You’re going to be fine. You just need to lean on me a little more.’ So I would.”

And, ironically enough, she has often received just the help she needs, like when she’s feeling like she’s not able to give each individual baby an adequate amount of love, someone would “show up at [her] front door wanting to hold a baby.”

And it’s because of that strength, and the enjoyment she’s found in motherhood, that she and her husband are now excited to learn that they’ll soon be welcoming twins into family – babies that were actually conceived naturally.

“I was delighted to have been prepared by the Lord so that it was something that was joyful rather than something that was a shock and hard for me to process,” she said. “With the triplets, I cried through the first four months of my pregnancy because I was so scared and so shocked and so not up for it. This time I’ve just been able to be excited from the beginning.”

She says she still does worry every now and then about how she’ll fit five car seats in their minivan or how she’ll sleep the first few weeks of the babies’ lives, but really? She says that she’s much more excited that all of her children will have siblings to grow up with.

“I’m grateful that they will all have a buddy, all the way through,” Julie said. “they don’t’ have to go through these hard times alone. They will have each other to get in trouble with, but also to keep each other on the straight and narrow. That is a great comfort to me. And we’re just going to have a lot of fun.”