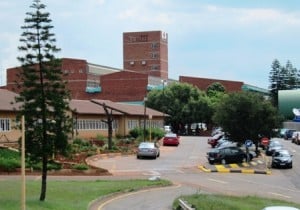 According to the Beeld newspaper, Janine Meiring went into labor on December 24th during her 27th week of pregnancy. The 33-year-old mother had been rushed to the Kalafong Hospital in Alberton, South Africa. She expected to be met with the urgency and safety that her premature birth situation required, but instead, she was met with what was apparently a short-staffed and negligent hospital.

After receiving an ultrasound, Janine says she asked about her baby. The doctor reportedly ignored her question. Janine then says that the hospital was so short staffed that no porter or wheelchair was available to take her back to the nurses so the doctor told her to walk.

“I said I could not and cried,” Janine told Beeld. “The contractions were out of control. He insisted I had to get off the bed and helped me off. I had hardly taken two steps when I felt the baby’s head with my hand. I told the doctor I could feel his head, but he said I should not touch there and pulled my hand away.”

Then, the unthinkable happened. Janine says that the baby fell from her body onto the floor, so hard that it bounced and landed on its head a second time. The baby’s umbilical cord then ruptured.

“Then the baby arrived and slipped through my fingers onto the floor,” Janine said. “I just looked at the doctor in disbelief. With a smile, he told me I had to pick up the baby. He did nothing to help me.”

Janine said she picked her baby up off the floor and ran to the nurses. She said that the baby was struggling to breathe. Sometime after the fall, her baby died.

A pediatrician told Beeld that there are many reasons the baby may have died: the traumatic head injury, the ruptured umbilical cord, underdeveloped lungs from prematurity, infection, or a combination of these issues.

Whatever the reason, Janine’s premature/high risk birth was met with a lack of concern and urgency. Because of this, Janine says the doctor’s license should be revoked.

“He should not work with women or children,” she said.

The Gauteng health department is currently investigating the death of Janine’s baby, and spokesman Simon Zwane says it is being attended to with “extreme urgency.” And while Zwane would not confirm whether or not the doctor being held responsible for the death was on duty, he did say that things will be handled in an appropriate manner.

“We are not happy that, on the face of it, it seems that somebody did not properly manage our patient and it resulted in this unfortunate incident,” Zwane told Beeld. “Once we are done with investigations, the matter will be reported to the Health Professions Council.”

This death follows a string of infant deaths at the George Masebe hospital in Limpopo during the festival period. According to sources, the babies ended up dying from diseases that could have been treated, had there been enough staff and management on duty to tend to the infants’ needs. Since those deaths, a senior manager of the hospital has been suspended.