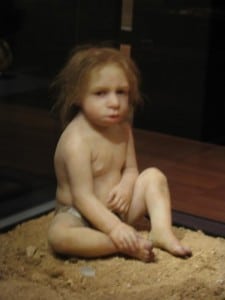 Wanted: Adventurous human women to become mom to a Neanderthal baby! Harvard geneticist George Church surprised the world in an interview last week when he said that he was close to developing the technique of cloning a cave man’s baby and the only thing needed was a surrogate mother!

Speaking to spiegel.de, the scientist says that human life for him was like a miracle machine, a gift given to man by nature.

“It’s as if some ingenious engineer parked a spaceship in our backyard,” he says. And this spaceship is “full of surprises”.

Church believes that he can clone a Neanderthal baby and someone might become his surrogate mom in the next 30,000 years. The 58-year-old biotech pioneer has already managed to attract enough DNA from fossil bones for them to reconstruct the DNA of the human species largely extinct.

According to MIT Technology Review’s Susan Young, the probability of such a baby being born is actually very high considering the cloning experiments that have already been performed. She pointed how in 2009 the extinct subspecies of ibex had been cloned by scientists though the clone did not survive.

Church is also a well recognized scientist in the cloning world. He was the co-initiator of the Human Genome Project that started in the eighties and made it his goal to decode the human genome. He was later, in addition to the two great pioneers Jim Watson and Craig Venter, one of the first people whose genome was sequenced and published.

The scientist also adds that eventually bioengineers will also begin bio-engineering of the genetic makeup of modern man and it is too tempting a field to be ignored.

He says even resistance to all kinds of viruses could be produced whether it is for measles, AIDS, flu or simple cold.

A 2008 study actually points out that a birth of a Neanderthal baby might be much less challenging for a mom than a modern human baby birth. As per Gawker, the study stated that,

“the head of the Neanderthal newborn was somewhat longer than that of a human newborn because of its relatively robust face.”

Also the Neanderthal women had a wider birth canal than modern women. The process of baby birth was very similar but the baby during those ancient ages did not have to rotate to get to the birth canal.

It is also thought that Neanderthal babies grew much more quickly than their human counterparts.

While some may find this to be a fantastic fantasy at present, Church is highly convinced that a cave baby could be a reality in 30,000 years. He also thinks that having Neanderthal babies could actually become a craze.

“We have lots of Neanderthal parts around the lab. We are creating Neanderthal cells. Let’s say someone has a healthy, normal Neanderthal baby. Well, then, everyone will want to have a Neanderthal kid. Were they superstrong or supersmart? Who knows? But there’s one way to find out.”

We’ll just have to wait and see what’s in store for future moms with a baby who is a blast from the past!