Christie Rea, a mother of four, recently spoke out about her breastfeeding experience at the National Gallery of Australia. Unfortunately, it wasn’t a pleasant one. In her own words, the Newcastle woman said “it was absolutely humiliating” to be pressured into leaving the gallery area for feeding her daughter. 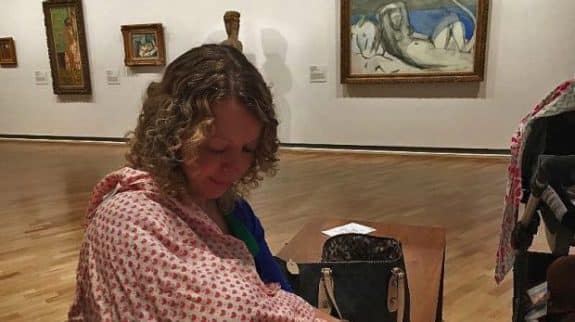 “I think we were in the Versailles exhibition. I knew that my baby was going to need a feed and I didn’t want to be stuck in a room downstairs,” Christie told news sources. “I feed in public quite regularly . . . I’m discreet as well. I know how to be modest about it.”

But the second she sat down, a security guard approached her. He then proceeded to encourage her to go somewhere else to feed her baby.

“He was not rude or anything, but he was quite stern. It was very clear that it was an issue of decency and modesty,” she said. “[He] said there was a parents’ room downstairs and I should use that.”

The guard only agreed to let her stay there and continue to feed after she draped a piece of clothing over her shoulders.

“I was basically shamed into covering up,” she said. “Women who breastfeed shouldn’t be shamed into sitting away in a back room.”

Interestingly enough, the photo of her breastfeeding her daughter has a painting of a naked woman. Christie’s oldest child also pointed out a naked sculpture nearby. Even more interesting is that the National Gallery held a naked tour two years ago. It was done in a James Turrell exhibition and was meant to “remove all material barriers between artist and audience.”

So, clearly, nudity is not an issue inside the art gallery. What was the problem then? Were they afraid she might squirt breast milk on a painting? Or is this yet another double-standard case? Nudity is okay, as long as it’s not related to breastfeeding . . . ? It just doesn’t make sense.

Breastfeeding has been recommended as the exclusive nutrition for babies up to six months by the AAP, WHO, and other health organizations. It has been shown to offer benefits to both mother and baby. We do not criticize every mom for feeding her baby in public – because that would just be silly! Babies can’t control when they are hungry (unlike adults). So why are we still fighting this stigma?