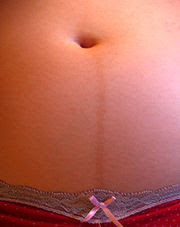 Now that the baby has arrived, all I am left with is some extra skin and my ‘Linea negra’ (a dark line down the middle of my belly).

Arriving usually in the second trimester, the linea negra is more commonly found in women who already have darker skin pigmentation and is caused by an increased production of the pigment melanin during pregnancy.

This unwanted line can last for several months after your baby is born. For some women the line will never completely go away. Some believe that there may be a connection between a woman’s insulin level and her getting linea negra, or even not getting enough folic acid.

During my pregnancy I had read all about this line, but didn’t get one until I was 36 weeks along. The insulin explanation makes sense because my OB found that my sugar levels were high closer to the end of my pregnancy around the time this line appeared. It also goes all the way down my tummy, which confirms the wives tale about having a boy.

Obviously, I want to know how to get rid of it and from what I have read – only times fades this line.