Home » Naomi Watts and Sammy Bundle Up In The City!

Actress Naomi Watts was spotted out for a stroll with her adorable son Samuel in New York yesterday. 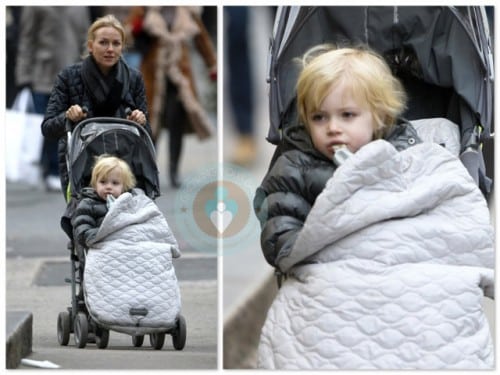 “No matter what, mothers will always punish themselves if they work,” she says. “Liev and I try to take turns [to make films] and it’s worked so far. We’ve probably only overlapped by a couple of weeks once or twice which is very fortunate because our family is the most important thing.

“Our children go everywhere with us. But then my sister-in-law, who works at least 10 hours a day, only gets to see her daughter for two hours in the morning and then she’s asleep at night when she comes home.

“So we probably spend more time with our kids than the average person. Luckily our children are still young and at the age where it doesn’t matter if they miss a bit of pre-school or nursery.

“They learn on the road with us. For example, last year, when we shot a movie called The Impossible in Thailand, they got to ride on elephants. they also had frogs and snakes in their shoes!

“They’ll never forget all these adventures. But when it comes to them being in proper school, we’ll have to stay more in one place.”