When most women find out they are pregnant they usually quit smoking, quit drinking and start their prenatal vitamins.A study done at University of Pittsburgh School of Medicine shows that two thirds of new moms, who smoked before their pregnancy, restart the habit after the baby is born. 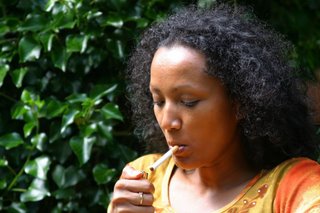 Researchers interviewed women who stopped smoking soon after learning they were pregnant. Those who said they were highly motivated to stay off cigarettes following delivery were also the least likely to consider smoking a weight-control tool.

Those who expressed fears they would not be able to control their weight if they didn’t smoke were, not surprisingly, less motivated to remain nonsmokers after pregnancy.

Twenty percent to 30 percent of low-weight births, as many as 14 percent of preterm deliveries, and about 10 percent of infant deaths are caused by exposure to cigarette smoke in the womb, according to the American Lung Association.

But the dangers for babies don’t end at delivery.

Mothers who smoke can pass nicotine to their babies through breast milk. And infants exposed to secondhand smoke are more likely to develop colds, bronchitis, and other respiratory diseases, including asthma.

The La Leche Legue Reports that:

Maternal smoking has been linked to early weaning, lowered milk production, and inhibition of the milk ejection (“let-down”) reflex. Smoking also lowers prolactin levels in the blood. One study (Hopkinson et al 1992) clearly suggests that cigarette smoking significantly reduces breast milk production at two weeks postpartum from 514 milliliters per day in non-smokers to 406 milliliters per day in smoking mothers. Mothers who smoke also have slightly higher metabolic rates and may be leaner than non-smoking mothers, therefore, caloric stores for lactation may be low and the mother may need to eat more.

Smoking has been linked to fussiness. In one study, 40% of babies breastfed by smokers were rated as colicky (two to three hours of “excessive” crying) as compared with 26% of babies breastfed by nonsmokers . It’s important to note that this link between smoking and colic has also been found with artificially fed babies with one or more smokers in the home.

Many people use smoking as a weight lost tool. I have known lots of people who won’t quit smoking because they weigh 10 – 15 lbs less while doing it. After quitting smokers now have nothing to do with that time or with their hands so they eat.

When you are breastfeeding you need to eat more so that the baby can get their nutrition as well as maintaining your own nutritional level. After you have a baby the most important things is to grow the baby, you may not have the opportunity to lose the weight right away.

Breastfeeding does help by burning off an extra 550 calories per day. You can also go for walks, even in the winter, and take and indoor yoga class.
With some work the weight will come off, it just takes time. We don’t have personal trainers and chefs like the mommies in Hollywood.