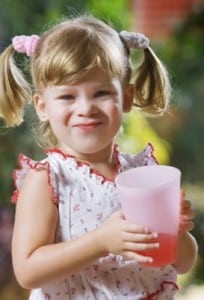 A new report has revealed something that most parents already know – manufacturers of sugar-filled sodas, fruit drinks, energy drinks and sports drinks are marketing directly to our children.

Marketers have promised to stop aiming their marketing tactics at children, but the report says they are still using social media, the internet, Prime Time television promotions, cause-related marketing and community events to place their products in front of children. In fact, the researchers found that, despite the industry’s promise, full-calorie soda television ad exposure has doubled from 2008 to 2010.

Probably most disturbing is the way that marketers are sneaking the sugar in. Many parents know that sodas contain a lot of sugar but what parents might not know is that forty percent of kids’ fruit drinks contain artificial sweeteners and some contain both sugar and artificial sweeteners. More than half of the sugary drink labels make nutrient-related claims. Sixty-four percent claim they contain “all natural” or “real” ingredients.

According to Marlene Schwartz, deputy director of the Rudd Center, this tricks parents into thinking that they are buying something healthy for their children.

“They also believe the nutrient claims about vitamin C and real ad natural ingredients, and interpret those as meaning that these products are healthful options,” Schwartz stated.

President and CEO of the American Beverage Association, Susan K. Neely, says the claims aren’t true, making the statement that, “the people at our member companies – many of which are parents themselves – are delivering on their commitment to advertise only water, juice and milk on programming for children under 12.”

“In fact, recent research reports that there has been a dramatic change in food and beverage advertising during children’s programming, with advertisements for soft drinks decreasing by 96 percent between 2004 and 2010 alone,” she stated. “This report is another attack by known critics in an ongoing attempt to single out one product as the cause of obesity when both common sense and widely accepted sciences have shown that the reality is far more complicated.”

Did anyone notice the “children under 12” portion of her statement? I know I did. Also, you can find another report that refutes her statement about marketing to children, here.

Clinical nutrition coordination at the Center for Cancer Care at Griffin Hospital in Derby, Connecticut, Samantha Heller says, “the Rudd Center study quantifies what most of us already know: that kids are drinking too much sugar. Still, the results are unsettling and disturbing.”

So how do you stop the sugary infestation in your home? Heller states that the first step is to stop bringing them into the home.

“There is no need to give a toddler soda or fruit drinks. They will be perfectly happy with water or low-fat milk or soy milk, if that is what they are used to. And while your teens may complain that there are no more sodas or fruit drinks in the house, they will get used to it,” said Heller.