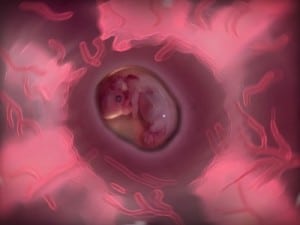 Obesity and obesity-related conditions like diabetes can have many adverse effects on the body. A recent study uncovered yet another that relates to fertility and pregnancy.

Women who are a higher than average BMI or those who have diabetes tend to metabolize more of their stored fat. This creates a higher amount of fatty acids within the ovaries. Previous studies have proven that the elevated saturated fat levels can be toxic to growing eggs during ovulation but, until now, it was unclear as to how it affected already developing embryos.

All of the evidence found within the study lends further support to recent suggestions that women should attempt to lose weight before conception. Previously, the suggestions were only based on the ability to actually conceive. Based on the new evidence, however, issues with normal, healthy fetus development once conception is achieved may also be an issue.

British, Spanish and Belgian researchers exposed eight-day-old cattle embryos to high levels of fatty acids to mimic the higher amounts of fatty acids found in the ovaries of women that are obese or suffer from diabetes. The results showed that the embryos had altered gene expressions, fewer cells and an altered metabolic activity, making them less viable and decreasing the chances that they would develop normally. High levels of specific genes linked to cellular stress were also found within the embryos, further suggesting a lowered rate of survival and normal development.

“We know from our previous research that high levels of fatty acids can affect the development of eggs in the ovary, but this is the first time we’ve been able to follow through to show a negative impact on the surviving embryo,” Jo Leroy from the University of Antwerp and leader of the study stated.

Any woman that wants to conceive should talk to their physician if they are either overweight or have diabetes.  Physicians can provide suggestions and guidelines about overall health and diet to increase the chances of conception and a healthy and viable pregnancy.