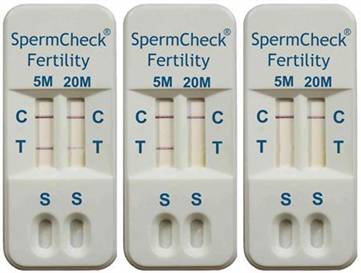 Men who would like to discreetly test their sperm count will be able to do so with a home test that will soon be available in Europe, and is undergoing Food and Drug Administration (FDA) review for marketing in the US.

Dr. John C. Herr of the University of Virginia in Charlottesville, who helped develop the new test, told Reuters Health the test targets couples who have been trying to get pregnant for a few months, but aren’t ready to seek professional help.

The test helps couples sort out if the male is a factor in the infertility “and to do that in privacy with some cost savings,” he said. “The product will retail for about $25. That’s a lot cheaper than going in and having a full semen analysis.”

Sperm counts of 20 million per milliliter of semen and above are considered normal. The test will tell a man whether or not his sperm count meets this cutoff, and if it doesn’t whether he has a severely low sperm count (below 5 million sperm per milliliter). “It basically tells the man how deep the infertility is,” Dr. Herr explains. “If both strips are negative it’s important that they then seek medical treatment for the infertility.”

For women to check if they are pregnant or close to ovulation they only need to dip a test stick in their urine and wait a few seconds, the SpermCheck Fertility test requires a few more steps.

Users let the semen rest for 20 minutes, collect 100 microliters using a pipette, and mix the semen with a detergent-containing substance known as a buffer, which releases the SP-10 protein from the sperm. Users then put a few drops of this mix into the two sample wells. Within seven minutes, the test results will appear in test windows above the wells.