Just what is going on at Yale University’s Baby Lab? No, they’re not coming up with a new flavor of strained peas. Instead, they are looking into the issue of whether or not babies are born with some sort of moral compass. In other words, long before parents can teach them the difference; do babies know right from wrong, good vs. evil? According to the researchers, it might just be that your newborn is already out front of these weighty moral issues.

Dr. Karen Wynn is in charge of the Baby Lab, a.k.a. Yale University Infant Cognition Center. For the last couple of decades, Dr. Wynn and her team have been studying babies under the age of 24 months to see just what is going on in their developing brains. The results are nothing short of fascinating and amazing.

In a simple baseline test, the babies are given a puppet show featuring a gray cat who attempts to open a big box but can’t. Along comes a bunny in a green T-shirt who helps kitty get into the box. The same scene is repeated only this time the bunny is wearing an orange T-shirt and rudely slams the box shut.

The conclusion: Green bunny is good. Orange bunny is bad. Then a staff member, who doesn’t know which bunny is good or bad, will present the bunnies to the baby. In over 80% of the responses, babies pick the good bunny. Surprisingly, in three-month olds the positive response bumps up to 87%. 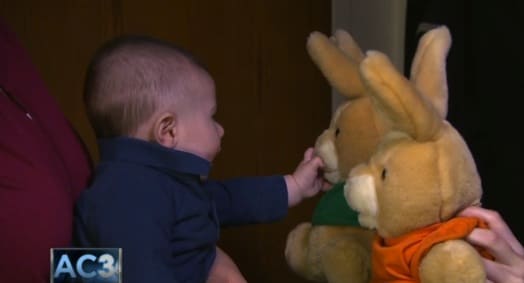 Dr. Paul Bloom is the author of “Just Babies: The Origins of Good and Evil” and is also husband to Dr. Wynn. He draws the conclusion that the babies can piece together a rudimentary sense of right and wrong even before they take their first step. However, this doesn’t mean they are ready to sit in judgment on “The People’s Court.”

“We are by nature indifferent, even hostile to strangers; we are prone towards parochialism and bigotry,” he writes in his book. “Some of our instinctive emotional responses, most notably disgust, spur us to do terrible things, including acts of genocide. The role of parents and society is to overcome these limitations and further develop the innate moral beliefs that already exist in those baby minds.”

Naturally, there are skeptics with these types of studies. They feel that babies aren’t capable of making these kinds of moral selections. Instead, they might just be attracted to the color of bunny T-shirt. That is why the Baby Lab crew goes out of their way to mix things up, change puppets around and swap out the colors.

They also performed a secondary test where the green bunny offers the child one cracker and the orange bunny two crackers.  Over 80% of babies chose the single cracker from the ‘good’ bunny, which researchers say shows that even young kids are willing to take a cost in order to avoid interacting with ‘the mean guy’.

Despite naysayers the team stands by their research and that might be good news for all of us who want to make sure our children know right from wrong. Of course, nothing can beat guidance from mom and dad.