Their job may be to serve and protect, but earlier this week one Ohio police officer showed kindness and comfort toward a toddler who was found roaming the streets.

Officer Will Nastold of the Cincinnati Police Department was photographed laying on the floor with a 2-year-old boy at the station after the toddler was found alone in the streets on Feb 2 with no shoes or socks on.

“It was quite obvious that [the boy] was cranky and was in need of a nap,” Sergeant Daniel Hils told ABC News. “He did not want to be left alone so Officer Nastold willingly laid down on the carpet and was trying to get him to nap. “[I was] extremely proud of him. Here’s a guy that’s got his bulletproof vest and his gear [on] and is doing all he can.” 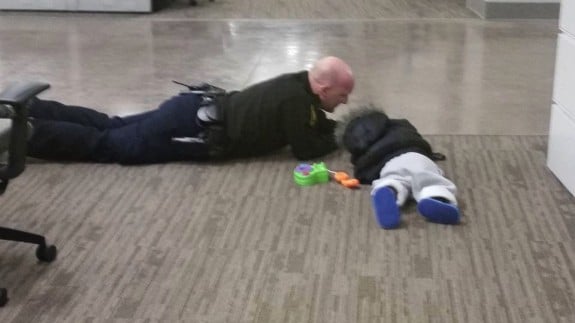 Once the toddler arrived at the station Officer Nastold laid beside him, playing with him and trying to get him to nap, while officer Landrum filled out the police report.

Sgt Hils shared the photo on the union’s Facebook page, where it garnered more than 5,300 likes and 3,000 shares!

“He was laying there comforting him,” Hils said. “If he were to get up the child would cry. I was equally proud of Jamie.”

Sadly, the story doesn’t have a happy ending.  When the boy’s mother, Tanisha Caldwell, 28, arrived at the police station three hours later to pick up the child, her breath smelled of alcohol.   She was charged and taken to jail, while social services placed the child with a relative.