A set of quintuplets, born on August 3rd, are doing well and are expected to be strong enough to go home before Christmas.

Parents Amie and Vince Spicocchi updated the Cantonrep on the babies progress saying they are now focused on getting the newest additions home to join the couple’s 2 other children Taylor, 14, and Grady, 5. 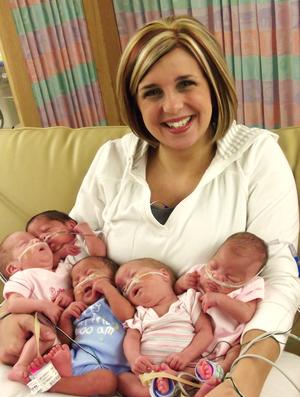 Born at 24 weeks 3 days, the 4 girls and 1 boy have grown considerably since their arrival 4 months ago. Now weighing over 5lbs, the quintuplets are also all breathing with just the help of oxygen, have moved from their incubators into open air cribs and they are getting feedings by mouth rather than tubes.

“They are gaining weight like crazy,” said Amie. “Enzo weighs 6 pounds 4 ounces, and the smallest are Paige and Ellie at 5 pounds 10 ounces.

“It’s amazing to think they went from 1 pound 9 ounces to five times that size.”

“They look like regular babies (now),” said Vince. “They’ve even got fat rolls.”

During their time in the NICU all of the babies have had surgery for ROP (Retinopathy of prematurity), have all had chest tubes and some have had infections. Paige had a collapsed lung, and first-born, Ilah, is being treated for a rapid heart beat, which he will likely outgrow it as she gets older.

To bond with the babies and help them grow, the couple has been kangarooing the quints for the last couple months.  This skin-to-skin time has been know for years this has been a very effective practice that has been shown to reduce premature deaths by 50%.

The familiar sound of mom’s heartbeat is calming, which helps the baby breathe better and she can sense if the baby is too warm or cold and through contact with her skin can warm or cool the baby.

“It helps with neurological problems, prevents infection, allows them to breathe easier and to digest better,” Amie said. “It also is important to build the bond (between the parent and child).”

Vince is also amazed with how the babies bond each other when they are placed together.

“They recognize each other,” he said. “They will hold each other and hold their hands. They will nuzzle into each other.”

As the couple prepares to bring the quints home they have set up an alcove in the living room that will serve as ‘baby central’.   For the time being two cribs will accommodate the babies until they start rolling around then they will moved into individual cribs.

“When they first come home, we will need a lot of help,” Amie said. “Since they are preemies, they need all the calories they can get, so they have to be fed every three hours.”

About 20 people volunteered to help with the babies, including a retired nurse and friends that are close to the family.

In order to keep their crew healthy Amy and Vince have been assured that everyone who has offered to volunteer has received a flu shot and a Tdap vaccine for tetanus, diphtheria and pertussis.

“We need to protect them,” Amie said. “We are going to be bringing them home during flu season.”

The Spicocchis are thankful not only for their five bundles of joy, but for the family, friends and strangers who have reached out to them.

“We want to express gratitude and thankfulness to everybody in the community, our friends and family and people we don’t know who have donated things, sent cards, prayers, gifts and meals,” Amie said.

We wish the couple well and look forward to hearing how they make it work when the babies come home!