Home » Out of Tragedy, a Miracle is Born 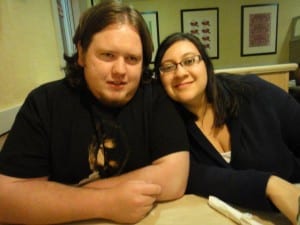 The recent shooting in Aurora has left, in its wake, many aching hearts. But even out of some of the most tragic events, something beautiful can emerge. In this instance, it is the survival and birth of Hugo Jackson Medley.

Hugo’s mother, Katie Medley, and his father, Caleb Medley, started dating their senior year in high school, and they’ve been side by side ever since. A close friend of the couple, who is currently their spokesman, says that the couple couldn’t be more made for each other.

“You could just tell that out of everyone in the world, these two were meant for each other,” West wrote on a website dedicated to Caleb.

Caleb was also meant for other things – since the eighth grade, he’d wanted to be a standup comedian. So, after he and Katie married, the couple moved to Denver where Caleb could chase his dreams. At first, things had been pretty rough.

Caleb shared his early struggles in the entertainment world in an internet video titled “Caleb Saves the Internet: Saving the One Nighter.” In this video, he jokes about a motel they stayed at. The deadbolt was busted, and there were stains on the wall. But things had started to turn around for Caleb. Just last week, he had performed in the standup festival at the New Faces Contest at Comedy Works South in Denver; he had performed well enough to go to the next round. He had also secured some gigs. And very soon, he would be a father.

Katie, now nine months pregnant, was set to be induced on Monday, July 23rd. She and Caleb, being huge Batman fanatics, had decided to head to the opening night of the movie, despite Katie’s very pregnant condition. They also considered the fact that this would be the very last time they would ever be able to go out as a couple without having to hire a babysitter.

“They had Batman apparel on. They waited for this movie for over a year,” said David Sanchez, Katie’s father.

But their last date night as a couple would soon turn from a fun couple’s night out to a horrible nightmare.

“They were having the normal opening night movie experience,” West wrote as he recounted a conversation that he’d had with Katie about that night. “They stood anxiously in line, spent too much on popcorn and soda, suffered through the movie trailers and watched the beginning the movie. That was when evil struck.”

West says that Katie told him: “I thought it was a prank at first or someone playing along with the movie. Then he opened fire.”

Survivors of the incident have painted a picture of the next several minutes; a picture that is nothing short of horrific. The instance was no different for Katie and Caleb.

Trying to protect Katie and his unborn child, Caleb was shot in the face. He was put in the back of a police car and transported to University of Colorado hospital. According to the website, run by West, he has lost his right eye, has suffered brain damage, and is currently in a medically induced coma.

The very next day, Katie, who walked away uninjured, went into labor at the very same hospital. As her husband fought for his life, she gave birth to their son, Hugo, on Tuesday. Both mother and baby are reportedly doing well.

Katie’s father, Sanchez, who was at the courthouse on Monday to see the man arrested for the crimes committed, says that he blames this man for ruining what was supposed to be a happy moment for the couple.

“When it’s your own daughter and she escaped death by just mere seconds, I would say it really makes you angry,” he told reporters outside of the courthouse. He also reported that Caleb is in critical but stable condition.

But Caleb’s condition isn’t the family’s only concern. Caleb and Katie, along with many of the other victims that day, are without health insurance. The cost for the delivery of their baby, alone, could have left them paying hospital bills for years. Now, they have to worry about the cost of Caleb’s medical bills, which could cost thousands of dollars, if not millions.

To help the family out, West has started a website to help raise money to cover Caleb’s medical bills. As of Tuesday afternoon, they had received about $90,000 from 2,600 donors. Hopefully, those donations keep coming in – it’s going to take a lot more to cover those bills, and this young family has already been through enough. It seems pretty unfair that Katie should have to worry about is how to pay for the medical services that could very well keep her husband and her baby’s father alive after a tragic event that wasn’t their fault