Megan Haggerty and Clyde Bodge went through what they thought would be the biggest shock of their lives when they learned triplet boys would be joining their already large family—three children (6, 8, and 10) from Megan’s first marriage and a daughter (then a year old). But now, with twins on their way their family of eight, their family is about to get even bigger! 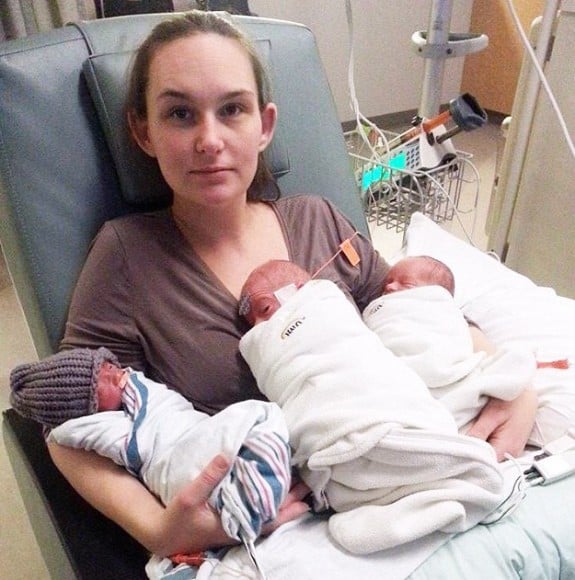 “I didn’t really expect to be getting that kind of news again,” Megan, 30, told Yahoo Parenting. “But I was also like, I’ve got triplets; twins will be a breeze!”

Currently, Megan’s fiancé, Clyde, is a stay-at-home dad—a responsibility that he took on after being laid off as a heating-and-air-conditioning technician back in February.

Megan has never used a fertility drug in her life, but she says that there are multiples on both her side of the family, as well as Clyde’s. Megan’s grandmother had twins, and a cousin of her mom’s had triplets, and then there have been a few sets of twins born on Clyde’s side of the family, and a set of quadruplets were born to his great-grandmother.

“Of course, that conversation wasn’t had until I was already pregnant with triplets,” Megan said, laughing, adding that her pregnancy with the twins still came as a bit of a surprise “but, knowing my track record, I had a feeling.”

The family has done well at taking everything in stride, and Megan says her sense of humor has been crucial in keeping her sanity . . . but there have still been some tough times in raising the triplets, and they expect that things may become even more difficult as the twins arrive.

“The triplets were really difficult at first because you only have two hands and to legs, and they all seemed to want to be fed at the same time,” Megan said.

And, because the family doesn’t have any nearby support from family to help with child care duties, they’ve had to do it all themselves. To make things even more difficult, Megan has had to miss a lot of time with the triplet boys since she spends around 90 minutes commuting each way to her job as an intake specialist at a psychologist’s office.

But that’s not their biggest concern, Clyde shared. With him out of work, and no other viable options for childcare, the family is a bit worried about how they’ll handle finances with two more children to take care of.

“It’s going to be a test,” Clyde said. “We’re going to have to keep our heads on straight to make ends meet. I’m willing to work at night.”

He says that won’t be much of a change since he already suffers from insomnia anyway—a lingering effect of a work accident that caused a concussion. But you won’t hear him complain as he busies the boys with listening to music, dancing, building with blocks, and an indoor pop-up tent.

And he’s confident that he’ll do just fine in managing the home-front once the twins arrive; he did manage to get three babies on a schedule, after all.

“Honestly, at first it was very stressful, but my day is so fluid now. I’ve got them on a great schedule,” he said, noting that the triplets even nap at the same time. “I know it seems scary to most people, but I’m really looking forward to it.”

Hopefully, the older siblings will feel the same way once they learn of the two new babies on the way; they haven’t been told just yet.

“They were very excited about the triplets, especially since they were all boys,” Megan said. “But it wore off quickly with our asking them to help all the time.”

Well, we’re sure the family will do the same as they have up to this point—take it in stride and have fun while doing it. And we’d like to extend our congratulations to the family on the upcoming arrivals!