Singer Pink enjoyed some time off from her busy promotional tour to spend some time with her adorable daughter Willow and husband Carey Hart. 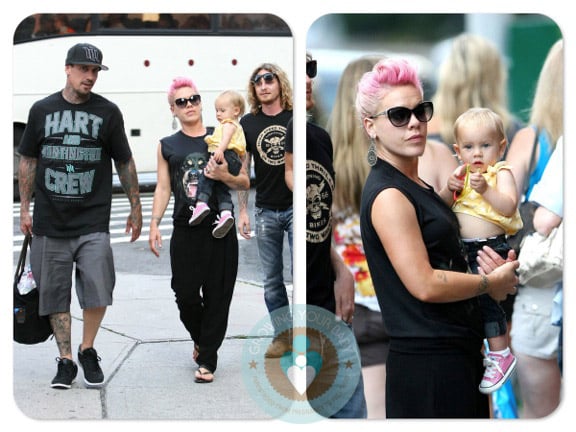 Still breast feeding, Pink revealed to Ryan Seacrest yesterday that she was nursing Willow while she was doing the interview. “Switching (breast) sides as we speak,” she joked. “My left is a lot more talented than my right.”

Motherhood, she said is “amazing” and Willow is already developing a distinct attitude.

“She’s got her daddy’s looks and my attitude — she’s going to rule the world.” She also revealed her daughter is “walking, dancing and has six teeth.”

A year post partum, Pink admits she is still holding onto some of her baby weight but her daughter is her priority.

Her husband Carey Hart has no complaints, but the singer knows most of it will come off when she goes on tour.

“Carey just says its more love… But he knows it’s tour time, he knows that soon there’s not going to be much to love,” Pink told a radio station.

Known for her edgy music Pink promised fans that being a mom hasn’t softened her rock chick image.

“Some people are worried [my new album]’s going to be a bunch of lullabies. It’s definitely not. I’m more aware of the cursing. It didn’t stop me but I’m aware of it. It’s a very, fun, dance-y, rock-and-roll record.”