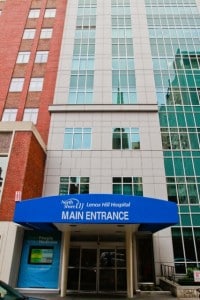 The biggest story in the entertainment world yesterday was the arrival of Beyonce and Jay Z’s first child – Blue Ivy Carter.  Not long after the baby’s entrance into the world details emerged about donation the couple made to ‘rent’ out a whole floor of the Lennox Hill Hospital in order to keep the baby safe.

Beyonce reportedly gave birth on the sixth floor, which is shared by the NICU.  Now, another parent, who has twins in the special care nursery, has complained that he has been blocked access to the secured area by the singer’s bodyguards.

The new dad griped that he’s been ‘repeatedly barred from the sixth-floor neonatal intensive care unit, once for 20 minutes, by the superstar couple’s private security’.

The bodyguards, who are equipped with headsets, reportedly cleared the sixth floor waiting room including the Couton family’s relatives.

“Three times they stopped me from entering or exiting the NICU (Neo-natal Intensive Care Unit) and it happened once on Friday — just because they wanted to use the hallway,” said Coulon, a contractor from Bedford-Stuyvesant.

“They should have been more strategic about it,” he said. “These are children with problems in intensive care and you’re just going to take over the hospital like you own it? All I want is an apology.”

While Hospital spokeswoman Anne Silverman said she had not personally heard of the complaints, Mr Coulon was not impressed by the double-standard treatment.

“I know they spent $1.3 million and I’m just a contractor from Bed-Stuy, but the treatment we received was not okay,” Coulon said. “My wife is just terribly upset. She had a C-section. She gave birth to twins. She is sore. Nobody needs this.”

“This is the NICU. Nobody cares if you’re a celebrity. Nobody is star-gazing. They just want to see their children,” fumed Coulon, whose wife, whose wife delivered two premature and underweight girls on Wednesday.

“To have that circus roll into town and ruin our parade was unpleasant,” he said.

As a mom who had a very premature baby, the stress of what is happening with your baby can be overwhelming.  Keeping NICU parents from their babies is completely unacceptable because their condition changes by the minute.   The hospital should have made different arrangements for Beyonce’s delivery – especially when they knew the precautions that were going to be needed to keep the baby safe.
Related Articles: