A very pregnant Jennifer Connelly showed off her baby bump in a gray Lanvin evening dress at the premiere for her latest film, The Dilemma, on Thursday in Chicago. 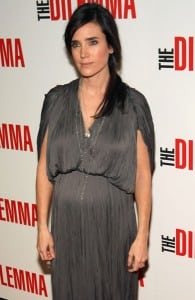 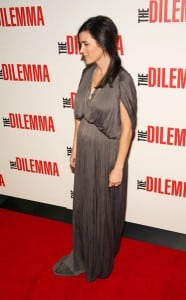 The mom-to-be told David Letterman that the first trimester of her third pregnancy has been riddled with bouts of nausea.

“The first three months were no fun. It was sketchy, like cell phone service sketchy,” the 40-year-old actress joked. “I have to stand in one spot in my apartment to make a phone call. It was like that with the nausea.”

So what’s her trick for curing the queasiness?

“I had to stand in one spot, which happened to be in front of my refrigerator, which was open, with me dipping pretzels in cream cheese and stuffing them in my mouth,” she laughed while describing her trick. “If I did that, I was good.”

The actress announced that she was pregnant with her third child in December. This is a second child for her and her husband, Paul Bettany.  Jennifer also has a son from a previous marriage, Kai, age thirteen. The new arrival will join Kai and brother Stellan, age seven, this Spring.