Over the years we’ve shared a many stories about moms who refused cancer treatment to save their babies – but we’ve never shared one quite like that of Carrie Deklyen.

Currently hooked up to a ventilator and feeding tube, the Michigan mother first learned of her tumor after suffering persistent headaches and vomiting. Diagnosed with glioblastoma multiforme, a highly malignant tumor that can spread quickly, she underwent brain surgery and was set to undergo a clinical trial for her condition. But then she learned she was pregnant. 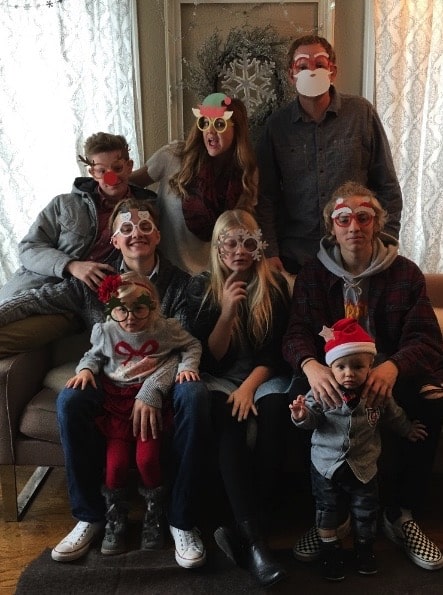 Carrie Deklyen and her family

Carrie, already a mother of five children (Elijah, 18; Isaiah, 16; Nevaeh, 11; Lelia, 4; and Jez, 2), knew exactly what she would do when doctors told her she had to terminate the pregnancy if she wanted to go through the trial. Her husband, Nick Deklyen, also knew what he wanted. But he had to ask his wife anyway.

“I asked her what she wanted to do. She said, ‘We are keeping it,’” Nick told ABC News in an interview. “That always was my choice, too, but I wanted her to decide because it was her life we were talking about.”

So, together, the couple moved through the pregnancy and hoped for the best. Carrie also continued to receive brain surgeries – three in addition to the first – but the cancer kept coming back. Then, on July 27th, Carrie started experiencing severe headaches. She and Nick didn’t know it yet, but that would be the last time that Carrie was coherent.

“We thought she would have some fluid removed from her brain and we would head home, but instead she suffered a stroke,” Sonya Nelson, Carrie’s sister-in-law, told ABC News. “It has been almost three weeks since that day and Carrie still has not woken up. Some days we are hopeful that she will wake up because she will wiggle her toes or squeeze our hand. We want her to wake up.”

But doctors say the prognosis isn’t good. Though she is slowly improving, she is still critically ill. Doctors are saying that she is currently on a good path to complete the pregnancy, but there are no guarantees. And so her family waits, hoping for a miracle.

“We are just hoping she can hold on long enough to deliver the baby,” Sonya said.

Nick added that the situation has been difficult for everyone – especially their children.

“The older ones obviously understand everything, so it is very hard on them,” Nick said. “They love their mother and know what they are losing. We talk about good times and laugh and then sometimes we just cry because we hurt so much. The younger two do not really understand what is happening. They know they sleep at Aunt Sonya’s all the time and do not see Mommy anymore. We tell them that Mommy is really sick.”

Yet, no matter what happens, Carrie is leaving behind a legacy. She would cook for her neighbors, her husband said, and tucked her kids into bed every night. Most of all, she entered the situation, knowing she probably wouldn’t survive and decided to give the gift of life to her child. In fact, if the baby does survive, her name will be just that – Life – a name that Nick and Carrie agreed upon before she suffered her stroke.

“I want the world to know that Carrie is truly one of a kind. She is the most selfless person I have ever met,” Nick said. “I will [tell] our daughter how amazing her mother was . . . of the great sacrifice her mom made for her. My kids have been so lucky to call her Mom.”