Eden and Darcey Mold, born just a minute apart, are beating the odds after being born prematurely with holes in their hearts. They’ve been through a lot, but now, at three months of age, they’re both doing rather well, given their circumstances. 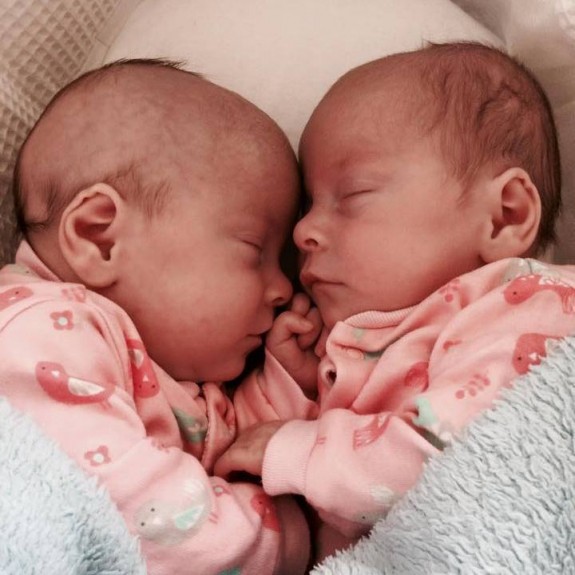 The girls’ parents, Katy and David Mold learned that Eden and Darcey had holes in their hearts at a 20-week scan. Surgery shortly after birth was inevitable, but when Katy’s water broke at 34 weeks and the girls were delivered at 4 lbs, 13 oz, each, doctors warned the couple to prepare for the worst.

While Darcey had been doing well enough to be sent home, Eden continued to stay in the hospital. She had several large holes in her tiny little heart. Doctors had wanted to wait nine days before performing surgery, just so she could gain a bit of weight and strength, but at a week old, she started having seizures. Worried she might have an infection, they operated on Eden immediately.

The surgery on Darcey was a success, but then, just days later, Eden started turning blue.

Diagnosed with bronchiolitis, Eden was admitted to intensive care where she spent 12 days fighting for her life. It took sedation, ventilation, and a blood transfusion before she finally started to recover.

By the time both girls had been well enough to go home, they were six weeks old. They hadn’t even had the chance to stay in the same room since Eden had been released. But they were finally able to go home with their parents to join their older sisters, six-year-old Matilda, and nine-year-old Jemima.

The girls have continued to make a good recovery, but Eden will still need open-heart surgery in the spring. Surgeons plan to use tissues from other parts of her heart to patch up the holes.

“When you put your ear to Eden’s chest, you can hear something swishing from chamber to chamber rather than her heart beating,” Katy said. “Her left arm has been cold recently, which we think is down to circulation. Of course we are very worried, but understand the doctors just want her to be as big and strong as possible so she stands the best chance of recovery when she has the op.”

So, for now, Katy and David are just trying to focus on enjoying their girls.

“I feel like I have been running on this rollercoaster of adrenaline ever since the birth. I was struggling to see the light at the end of the tunnel, but wanted to stay strong for my family. What’s so hard is the unknown, the paranoia. I’ve been constantly on red alert, worried my children might die,” Katy said. “We still have a long way to go, but I’m very happy to finally have them home. I feel very lucky that both my girls are okay at the moment. They’re both little fighters. They really are both little miracles.”