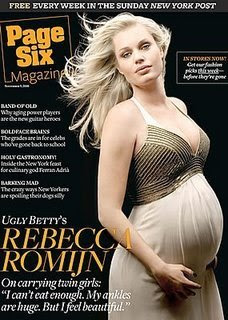 ORIGINALLY POSTED:Congratulations to Rebecca Romijn and Jerry O’Connell on the safe arrival of their first and second babies!

Howard Stern announced the news on his Sirius radio show this morning.

The couple announced in July that they were expecting.

In November, Rebecca told Page Six magazine she was ready to give birth because she was on bedrest.

“I can’t move anymore… I’m a beached whale!” she said. “I have not been without a bra this entire pregnancy. I refuse. I’m not taking any chances. I’m determined to keep the puppies up!”

She also revealed that the twins were conceived without the help of in vitro fertilization or the fertility drug Clomid.

“A year ago, we tried Clomid for a couple of months unsuccessfully,” Romijn said. “But by the second month, I was like, ‘Ahhh! I hate this!’ I think when you start messing with your own hormones, it’s crazy-making.”