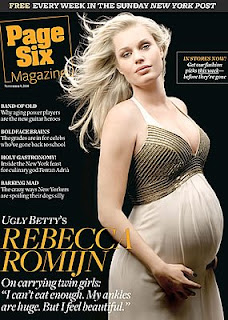 Ugly Betty star Rebecca Romijn poses for the cover of Page Six Magazine. She talks openly about her past relationship with John Stamos and whether or not she used medical intervention to get pregnant.

“We did not do IVF,” she says of her and hubby Jerry O’Connell. “A year ago, we tried [the fertility drug] Clomid for a couple of months unsuccessfully. But by the second month, I was like, ‘Ahhh! I hate this!’ I think when you start messing with your own hormones, it’s crazy-making.”

Rebecca says that once her baby girls arrive, Jerry will make the best father.

“I knew early on he would be a fantastic dad,” she says. “He’s a pragmatic, smart, savvy, enthusiastic person. He really lives his life with tremendous integrity, and he’s a healthy person in every single way.”

The mom-to-be, whose been happily married to Jerry since July of 2007, opens up about her divorce from her first husband John Stamos — and the rumors that their divorce stemmed from her not wanting children.

“There is absolutely no truth to that,” she says. “That [story] was completely made up. I desperately wanted kids. I was never a girl who dreamed about what her wedding day would be like, but I’ve always dreamed about decorating my baby’s nursery.”

To see more on Rebecca’s interview, check out the New York Post Web site this Monday.