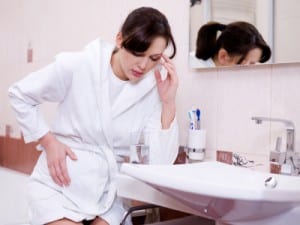 Morning sickness, the misnamed feeling of nausea and vomiting during pregnancy, is a too common condition that is often overlooked by researchers. Now, however, a team of Toronto researchers is planning to look at the causes and find a way to prevent severe morning sickness for women.

Researchers at the Hospital for Sick Children’s Motherisk Program are inviting women from all across Canada to be a part of their study on morning sickness. This study is the first of it’s kind, aimed at preventing morning sickness from becoming unbearably severe.

Half of the women in the study will be given doses of Diclectin, a pharmaceutical made by the Quebec drug company Duchesnay Inc. Diclectin is an anti-nausea medication that has already seen good results in previous testing.

“In other forms of severe vomiting, such as with cancer treatment or motion sickness, we have pre-emptive treatments,” says Dr. Gideon Koren, director of Motherisk and the study’s principal investigator. “You may take something before you travel if you know you’re going to throw up. In cancer chemotherapy — these are powerful drugs and most people vomit, so you give them antiemetic (medication for nausea) before.

“For women who have experienced severe morning sickness in a previous pregnancy, why shouldn’t we start giving them the anti-emetic before they start this vicious cycle again?”

Prescribing medication for nausea during pregnancy is a touchy subject for many. The traumatic results of the prescription thalidomide during the 1950s and 1960s still resonates with people today. However, some some women the effects of severe morning sickness are still too much to bear.

Naomi Rumack is one mother who says that on most days, she felt too nauseous to speak. During her pregnancy, anything could trigger vomiting. Taking a shower, driving to work, and even just sitting at her desk were excruciating during her pregnancy.

“Everyone expects you to be so excited and happy about being pregnant, and it was a planned pregnancy. But I couldn’t. I was just focused on surviving the day.”

Some women had admitted that their nausea became so severe they chose not to continue the pregnancies. Dr. Koran wants to find a way to treat women that have morning sickness at levels more than they can handle.

“These are the women who may vomit 30 times a day,” Koren says. “We want to look at everyone, not just the severe cases that required hospitalization, but where the experience was so bad, the woman is hesitating having another child.”