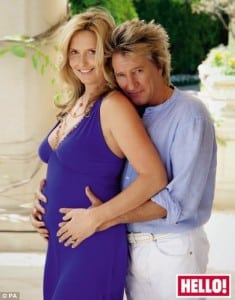 After trying for more than 2 years to give their son Alistair a brother or sister, Rod Stewart and his pregnant wife Penny Lancaster have revealed how they were forced to turn to IVF after a long battle to have another child.

Speaking for the first time to Hello Magazine about their struggle the couple said that when it didn’t happen naturally it was an emotional setback for them but they spoke to medical experts in the US and the UK about IVF treatments.

Doctors found that Penny had high levels of mercury in her body that made it difficult for her to conceive. Experts believe that high mercury level can be harmful to unborn children and those who are trying to get pregnant should limit their oily fish intake to two times a week. Penny had been taking a high-protein, low-fat seafood-based diet which was increasing the levels of mercury in her body.  When she was asked to cut her fish intake the mercury levels lowered, resulting in more feasible conditions for conception.

“A homeopathic doctor told me my mercury levels were really high, off the scale. I do love fish, and I thought it was healthy without understanding the high mercury levels that fish like tuna, swordfish and halibut can contain. My doctor said it was unhealthy to have so much mercury in my body, and also for conceiving babies.”

Penny had to go through three rounds of IVF before she finally became pregnant but she says the struggle was worth it, when she saw the joy the news gave their son Alastair.

“Our son’s happiness made all the IVF treatments worthwhile,’ she said

When the news of the pregnancy finally came it also incredible happiness for the couple.


‘I couldn’t believe it.”, Penny told the magazine, ” I burst into tears. I called Rod when I was still sobbing. Rod said, “I’m in the middle of a restaurant in Russia, crying”. I kept pinching myself. Neither of us could believe it.’

The new baby is scheduled to arrive just weeks after the singer celebrates his 66th birthday – and shortly before his wife turns 40.