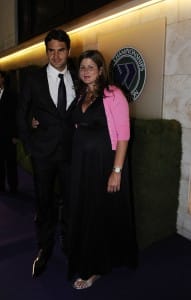 Congratulations to Roger and Mirka Federer on the safe arrival of their new babies – Twin girls!

According to the tennis star’s website, the couple welcomed Charlene Riva and Myla Rose on Thursday night in Switzerland.

“This is the greatest day of our lives,” the new daddy, said in a statement. “Mirka, Myla and Charlene are all healthy and doing very well.”

Roger and Mirka have been together for nine years ago but didn’t get married until April. They announced the pregnancy in March.