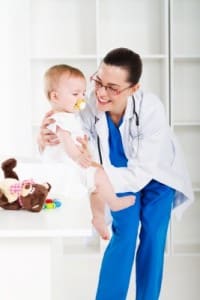 Medical science is on a constant quest to diagnose autism at an earlier age.  A new screening checklist is in the works to spot signs of autism spectrum disorders as early as a child’s one-year check-up.

Researchers recruited 137 San Diego area paediatricians to issue a 24 question checklist to parents at their child’s one-year check-up appointment.  More than 10,000 babies were involved in the sample.  The questions, in the checklist, seek to identify children exhibiting early difficulties with communication and social development.  At one year, children should babble, wave, point and attempt to draw adults’ attention.

“There are subtle signs of autism at one year if you just look for them,” according to Karen Pierce, study leader and neuroscientist at UC, San Diego.  “Let’s just get these kids detected early and treated early.”

Early treatment seems to lessen the severity of autism, but at the moment, the average child is not diagnosed until the age of five.  It is estimated that approximately one percent of children, in the U.S. have a form of autism.

There is still some work to be done, to fine tune the checklist.  But, the potential benefits of early diagnosis and treatment for autistic children is very exciting. – Jen R, Staff Writer.